The result of a secret experiment run by Bubonic, Creeperhogs are the latest addition to Rageik's army. Despite technically being Trolls, they do not revive upon death; this is not true for the Advanced series, however.

Creeperhogs are hedgehog-like creatures with somewhat elongated bodies and rather stubby limbs, covered in green fur with darker patterning, and having a peach-colored muzzle and chest; like Mobian hedgehogs, their quills come in different natural styles, and even physical builds and fur patterns may differ between individuals. The sclera of their eyes is black, and their pupils are red. Their legs are digitigrade with paw-like feet and black toes, and their forearms are somewhat thick, with three black fingers and a thumb. Their tails are also a fair bit longer than those of regular Mobian hedgehogs.

Although they do come in male and female genders, it is near impossible to distinguish between the two, or even determine what gender they are from a glance, as they are almost perfectly androgynous. Interbreeding between different Elemental variations hasn't happened, but it is being looked into for the possibility of creating offspring with the abilities of both parents (I.E the offspring of a Fire and Electric Creeperhog being able to control the Advanced Element of Plasma). This is similar to the inter-Elemental breeding attempts people have made for Imps.

Despite being artificial creations, Creeperhogs have the ability to breed naturally; although given their generally short lifespans, and the fact that a female (normally) only lays a single egg every year, Bubonic still relies on the creation chambers for spawning more Creeperhogs.

The egg is guarded diligently by both parents, who will become aggressive if their nest is disturbed. The hatched offspring lacks the specialized cells around their heart that enables them to explode; this does not form until they are about one year old.

They tend to wander aimlessly about until they spot whatever they consider an enemy, in which they will then approach the enemy and attempt to kill them by exploding right next to them. They really only attack non-enemies if they feel they are a threat, or if they've been startled, however; this is especially true for Light Creeperhogs, who appear to be the most peaceful of the species.

They communicate via a wide range of vocalizations, and are intelligent enough to plan and execute reasonably coordinated attacks against their enemies. They are more feral in nature, however, than the other Trolls; this means that it may be possible to "tame" them by exploiting their lack of true sentience. Creeperhogs of opposing Elements (such as fire and ice) get along quite poorly; fights ending in explosions are not uncommon. However, Creeperhogs of similarly-themed Elements (such as water and ice, or nature and earth) seem to tolerate each other just fine.

Gunpowder is like catnip to them, and can possibly be used to tame them.

Fully omnivorous, Creeperhogs will eat close to anything. It is shown that each individual has favorite foods, and will readily go for said favorites when offered them. As stereotypical as it seems, Elemental Creeperhogs have favorite foods somewhat based on their Element; for example, Fire Creeperhogs adore spicy foods.

They appear quite harmless and weak, but they've got a deadly secret; when they're close enough to an enemy, they explode with the force of a regular grenade. They have a habit of grabbing the enemy before they detonate themselves. When a Creeperhog is about to explode, they let out a long hissing sound, similar to a burning fuse. They also explode upon death.

Even more dangerous is the fact that they will sometimes gang up on an enemy and explode en masse. They are also completely silent when they walk, allowing them to "creep" up on their enemies. They can run up to speeds of 45 MPH.

Their explosive capabilities are the result of a reflexive action that activates special cells around their heart. This also explains why they explode upon death; the absence of a heartbeat sets off the cells. Unsurprisingly, this has made any attempts to dissect and study their corpses impossible... also because they leave no trace of a body behind after death.

The regular Creeperhogs are physically the weakest of their brethren, able to be killed by any Elemental attack, and by conventional weapons (I.E firearms, blades, etc.). The Elemental Creeperhogs are stronger, naturally.

Recently, Bubonic has been altering the Creeperhog code, in an attempt to create much stronger ones that don't need to rely solely on their explosive prowess. He plans on them being able to fight and only explode as a last resort or upon death, with the Elemental variations using their Elements as well, of course.

So far, only one has actually been created, yet is still in stasis; a female Chaos Creeperhog by the name of Ripley, codenamed "Alpha".

Already the template for an Inferno Creeperhog (advanced Fire Creeperhog) is being made. There are plans to make one for each Element, and apparently they will be the strongest of all their brethren.

A list of all of these Advanced Creeperhogs that are planned to be made (names are tentative and subject to change);

One of the regular Creeperhogs that Bubonic created...came out wrong. It had blue eyes instead of red, and didn't seem to want to explode. Frustrated after numerous failed attempts to "normalize" it, Bubonic finally forced it into a pod and launched it at Mobius, where it crash-landed in the middle of Station Square. Reports of the deadly Creeperhogs had already appeared on the news, and naturally this friendly one caused unintentional panic in the citizens of Station Square.

G.U.N was called in to capture the creature, and it was there that this Creeperhog's unique ability was discovered; it was capable of generating explosions in the immediate area without harming itself. Unfortunately, everything else around it wasn't so lucky. However, it really only generates these explosions whenever frightened and stressed.

It is much more passive than the other Creeperhogs, and will attempt to run when attacked, only defending itself with explosions as a last resort.

They are obviously based on the Minecraft enemy known as the Creeper. 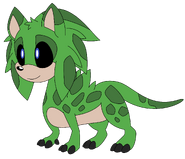 A regular Creeperhog (outdated design)
Add a photo to this gallery
Retrieved from "https://sonicfanon.fandom.com/wiki/Creeperhog?oldid=1851122"
Community content is available under CC-BY-SA unless otherwise noted.