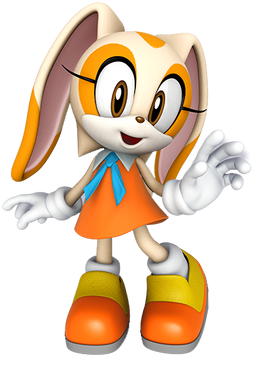 Cream the Rabbit is a recurring character in the Marshalia13 Universe. She is an anthropomorphic rabbit and the daughter of Vanilla the Rabbit. She is a friend of the Chao, especially to her dear Chao friend Cheese, who she takes with her everywhere. Originally living an idyllic life with her family, Cream had a chance encounter with Sonic the Hedgehog and his friends when the evil Dr. Eggman entered her world, and soon began joining them on their adventures. She is able to achieve flight by flapping her large ears.

Cream is a small, anthropomorphic, lop-eared rabbit with cream fur and brown eyes. She has princeton orange markings around her eyes, on her head and at the ends of her ears. She wears a simple vermilion dress with a white collar and blue cravat, and orange and yellow shoes. Her ears are usually swiveled back and flop behind her head.

The majority of Cream's past is unknown. Growing up, Cream was raised by her mother, Vanilla, and was brought up like a princess under her mother's kind, but strict discipline. This parenting is what gave Cream her polite manners, but also her childishness. At some point, she met Cheese and the two of them became inseparable friends, with Cream taking Cheese with her wherever she would go.

During one of his various schemes, Dr. Eggman abducted Cream and her family, only for Sonic to free her and Cheese. She then joined him and his various allies in the quest to rescue her mother as well, with the family later taking up residence on Westside Island. When Cheese's brother Chocola was abducted by Metal Sonic, Cream joined Team Rose alongside Amy Rose and Big the Cat in order to rescue him. She also befriended Emerl, an ancient robot who was later destroyed, and was overjoyed when her friend Tails reprogrammed Gemerl to be like him, with the robot joining the Rabbit family in their home. Cream went on to befriend Blaze the Cat , joined a new incarnation of Team Rose with Amy and Vector the Crocodile in order to compete in an Extreme Gear competition, made a new Chao friend while caught up in Eggman's schemes regarding the Wisps, and was one of the many friends and allies of Sonic scattered across his history by the Time Eater.

Cream was taught at a young age the importance of manners. She is a polite, considerate, and brave little girl, yet also very fun-loving and child-like. Highly curious, she is very enthusiastic about meeting new people and seeing new places. Even with her mother's lessons in manners, she can still be a bit forward, but is quick to apologize. Because of her emphasis on the importance of politeness and manners, she has a low tolerance for rudeness; even the thought of others being dishonest can cause her dismay.

While young, Cream is also quite astute, able to recognize the correlation between events that would seem to be unrelated.

Using her lop rabbit ears, Cream is able to fly high off the ground, and the amount of strength she uses enables her to carry loads larger than herself (such as Amy and her Piko Piko Hammer).

Vanilla being Cream's mother is a very important role in her life. Cream, likewise, loves her mother as both shower love on each other. Basically because of her mother, Cream is such a well mannered rabbit as Vanilla brought her up very nicely. Both share the same kind, loving and pious personality.

Cheese is Cream's Chao friend along with his brother Chocola, they have been together since their debut, the two are rarely seen apart from the other and they go every where together. The two of them work well together and even give each other courage.

Cream and Amy share a very close relationship like sisters similar to how Tails and Sonic are like brothers. They are both a part of Team Rose along with Big. Amy and Cream worry about each other and try to help each other. Amy is also very caring for Cream. Cream also describes Amy's obsession with Sonic 'short-sighted'. Despite not wanting to help Amy chase Sonic, Cream still sticks up to Amy and helps her out like a side-kick.

Cream basically looks up to Sonic as an older brother and is like a sister to him. She also takes him as her savior and highly respects him. She often calls him by the name of "Mr. Sonic" as, due to her polite nature, she believes it to be good manners.

Retrieved from "https://sonicfanon.fandom.com/wiki/Cream_the_Rabbit_(Marshalia13%27s_Universe)?oldid=1786652"
Community content is available under CC-BY-SA unless otherwise noted.