Cream the Rabbit is a cream-colored rabbit with light brown markings, who is also from the canon series. She is the only child of Rex and Vanilla the Rabbit. She lives somewhere in the Green Hill Zone with her mother, and her pet Chao, Cheese. 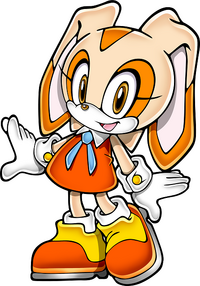 Her friends and family

Violence (Both Physical and Verbal)

Anyone who is Evil

Her friends and/or family in danger

Super strength (to an extent)

Cream the Rabbit was born the first and only child of Rex and Vanilla the Rabbit, when her parents were at a young age. She had a cousin, LaRae, born three months earlier, but had died one hour after birth, due to being born prematurely. As a result, Rex and Vanilla allowed LaRae's parents, Vanilla's older sister, Sugar, and her boyfriend, Dylan, to help out with Cream once in a while.

When Cream was two years old, Rex had gone missing, and was later assumed to be dead. This forced Vanilla to raise her as a single parent, even though the rest of her family would try to help the best they could. Sometime between the ages of two and six, she and her mother had adopted Cheese, her pet chao.

When Cream was six years old, she, along with her mother, were captured by Dr. Eggman. Sonic saved Cream first, and eventually they were able to rescue Vanilla. Since then, Cream has become good friends with Sonic and co., and tries to help when she can.

When Cream is not in school or on an adventure with her friends, she helps her mother and aunt run The Sweet Shop, along with Big and Cheese . While her main affections are towards Tails, there may be others who have feelings for her.

Since Cream has made no formal appearances in IncaIceBunny's Fanfictions yet, it is difficult to determine whether or not she has any differences from her canon counterpart. If she does, they have yet to be shown.

Cream is able to fly by flapping her ears, and using them as wings.

Despite her small size, Cream is much stronger than she looks, being able to lift and carry things several times her weight while flying.

She can run at high speeds, though not quite as fast as Sonic, Shadow, or Amy.

Retrieved from "https://sonicfanon.fandom.com/wiki/Cream_the_Rabbit_(IncaIceBunny%27s_Universe)?oldid=1790253"
Community content is available under CC-BY-SA unless otherwise noted.