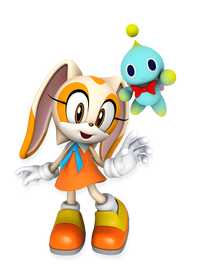 Espio the Chameleon, Vector the Crocodile,

Oh, not at all, Mr. Sonic! Please, do come along; we'd love to have you visit!

Cream the Rabbit is a six-year old rabbit who lives with her mother, Vanilla. She's not part of the Knothole Freedom Fighters, but she has played an important role in BearfootTruck's stories. Other than her backstory, she's practically identical to her official counterpart. For other counterparts, go here

Cream's backstory actually begins with Vanilla. Vanilla used to live in Emerald City before Dr. Robotnik's coup. After fleeing the city, she lived on her own for a while until she met a freedom fighter named Ice the Rabbit. The two fell in love and eventually got married. However, their marriage was cut short when Ice was captured by Robotnik's forces. Saddened, Vanilla made a vow to treat her unborn child with the utmost of love & care. For all her life, Cream & her mother lived a peaceful existence in a small cottage near Carnival Night Zone. However, that all changed when the Doctor struck…

Cream still has that sugar-sweet personality that she's become known for, plus her good manners. Just don't make her mad...

Not many changes here. The only difference in this universe is that Cream has super strength. However, her strength is not on par with Knuckles' or Shadow's strength. Also, because of her largely pacifistic personality, she has yet to display such power.

Though Cream shuns the usage of weapons, she will use her pet chao, Cheese, to attack.

Cream encounters Robotnik sitting on a log, loathing his recent failures. She tries to cheer him up, but he yells at her, so she leaves him alone, inadvertently giving the Doctor a new idea. Later, after Sonic has disappeared, Cream brings his bag to Sally Acorn & Bunnie. Much later in the story, she spots Shadow after he wakes up and informs him that somebody's scribbled on his face. The culprit was an impostor of Sonic. This very same impostor snatches Cheese, upsetting Cream and causing her to run back to her mom. By the time they find Cheese, Shadow & Silver have defeated the impostor. At first, Cream mistakes him for the real Sonic, but Silver calms her down and assures her that it's just an impostor. She thanks Shadow for rescuing Cheese and gives him a hug, but he doesn't return the favor. In any case, Cream, Cheese & Vanilla return home.

In this story, Cream encounters a very frustrated Sonic. Here, it's revealed that she – unlike Sonic's other friends – is not a huge fan of Super Changin' Muscle Rangers. In fact, Vanilla won't let her watch the show because it's too violent (like Cream didn't see that much violence in real life already). Sonic is relieved to hear this and asks if he can rest at her house for a bit. Cream says yes and brings him to her house. Here, Vanilla cooks Sonic some chili dogs for lunch, and after lunch, they all watch Family Matters. However, Sonic has to leave because the stars of Super Changin' Muscle Rangers have been kidnapped. After the Blue Blur leaves, Cream comments on how great Sonic is.

Cream & Cheese somehow manage to enter the lair of Robotnik, who by now is very angry because everybody keeps giving him hotcakes. Thus, Cream & Cheese try to be as nice to him as possible and assure him that their intentions are honorable. Just to satisfy them, Robotnik gives in and accepts their gift, which turns out to be a plate of blintzes. The gift also includes a recipe plus a paper with a few cultural notes on blintzes. However, none of this is enough to change Robotnik's feelings about any kind of pancake; he instead sends a lot of badniks after Cream & Cheese. The two of them are trapped, but Shadow comes to the rescue and frees them, damaging Robotnik's HQ with a Chaos Blast.

Cream decides that Sonic deserves something for being "the best person in the world", so she & Amy host a small parade for him. When the Blue Blur says he doesn't want to ride with them, the girls act all charming towards him, causing him to change his mind. Sonic doesn't mind being with Cream, although he has some hesitation about being with Amy. Eventually, when Robotnik & Snively attack the parade, Cream hurls Cheese at Snively's hovercar, sending Snively hurtling away with the Doctor. After Sonic leaves the parade, Cream tries to cheer Amy up, saying that she should be grateful for being able to spend time with him.

Towards the end of the story, the parade arrives in Knothole. Cream is awed by the statue of Sonic & Tails, but then she becomes depressed because she thinks that the flowers she got for Sonic aren't good enough. Fortunately, Ol' Blue gives her a hug and assures her that the flowers are one of the best gifts that he's gotten. After Rouge puts Sonic back into a trance, Cream is one of the characters who comes to his aid.

Retrieved from "https://sonicfanon.fandom.com/wiki/Cream_the_Rabbit_(BearfootTruck%27s_Universe)?oldid=1402788"
Community content is available under CC-BY-SA unless otherwise noted.