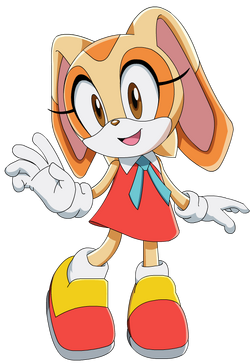 Cream the Rabbit is a fictional anthropomorphic rabbit created by SEGA. She is a young sweet girl who loves the thrills of adventure. She's a really sweet girl who lots of people look up upon for kindness.

Cream is very polite. She always says "Please" and "Thank you" and shows great manners. Her mother has strict discipline, and makes her act appropriately. She does what she is told always, and does her best at doing the things she's terrible at.

Cream is also cheerful. She cheers her friends and encourages them to do the things that they don't think they can do. She does her best to help out her friends into doing what they think is right.

Cream stands at about 2'11 inches and weighs about 60 lbs. She is a young girl with soft peach fur and ears. She has orange rings around her eyes, at the bottom half of her hair and on her forehead. The inner part of her ears are pink. Her skin and muzzle. Her eyes are disconnected with brown pupils and one eyelash on each eye.

For attire, she normally wears a red-orange dress with a white collar. On that collar is a baby blue ribbon. For shoes, she wears red-orange and yellow shoes with light grey soles and white socks. She also wears white gloves with sock-like cuffs.

With Cream's ears, she is able to fly. It took her a while to master this, but later on, she got the hang of it. She can fly for quite a long time, but after 5-10 minutes, she gets tired and flies back down. She can't fly as high as Tails, but she can fly further.

Cream happens to be very good at cooking. She helps her mom bake meals for the two of them, along with Cheese, to eat. She makes really good sandwiches and frankfurters.

Cream fights alongside her pet chao, Cheese. For a little girl, her kicks are pretty strong. It's pretty hard to defeat Cream in battle, so watch out!

Retrieved from "https://sonicfanon.fandom.com/wiki/Cream_the_Rabbit/Darkest_Shadow%27s_Universe?oldid=1714257"
Community content is available under CC-BY-SA unless otherwise noted.