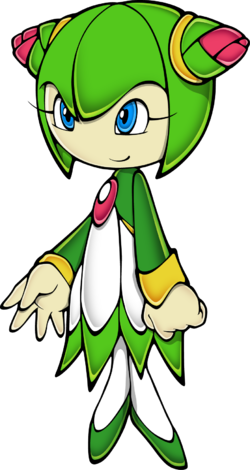 Cosmo the Seedrian is a Freedom Fighter and the protagonist of the Marshalia13 Universe. She is a female child of a plant-like alien species whose home world was destroyed by the villainous Metarex.

Cosmo was born on a home world that inhabited by a plant-like species of aliens called seedrians. While she was still young, her world was attack by the Matarex, her mother and sister were killed while Cosmo managed to escape.

Cosmo is kind and gentle, though she often feels guilt because she was unable to save anyone from her home planet ever since the destruction of the Metarex. She also seems to suffer from a low self-esteem issue, often calling herself "unworthy" or blaming herself for the hardships that she and her friends had to endure. Cosmo also dislikes violence, but acknowledges that fighting is sometimes a necessity, although she herself is unable to fight. Cosmo can be somewhat clumsy, but she is also quite resourceful; she also has a penchant of getting into trouble.

Cosmo does have a few abilities, being a plant herself, such as having the ability to empathize with plants, trees, or the planet and determine their state of life. Cosmo can jump high and gently float down with the aid of her skirt. Cosmo has demonstrated some sort of agility. She also shows heavy endurance as she is able to recover from powerful attacks quickly. She is able to read and decipher the Metarex language.

Retrieved from "https://sonicfanon.fandom.com/wiki/Cosmo_the_Seedrian_(Marshalia13%27s_Universe)?oldid=1786344"
Community content is available under CC-BY-SA unless otherwise noted.