The author of Cosmo the Seedrian (Blue Blur) considers this page to be unfinished. As such, some sections may change. 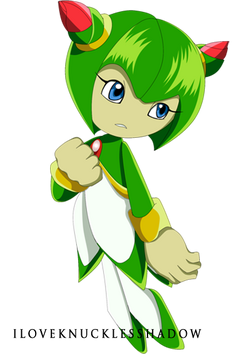 Cosmo the Seedrian is the Guardian of the Seedrians, the love interest of Tails, and the sidekick of Sonic the Hedgehog. She shares the position of major protagonist with Tails in Blue Blur.

She is a very soft and kind girl who loves having friends and the look, sound, and smell of nature. She is as brave as Sonic, mainly because she was raised by Sonic ever since she was a young child.

She was born in Greengate in the early 23rd century, and was raised by the Mother Tree (a.k.a. Earthia) and Lucas. She was meant to be the Guardian of the Seedrians, and she has the power to be that. But she was separated from her family when Dr. Robotnik invaded her homeworld as a test before invading Mobius. She was sent by Lucas to Mobius before he got roboticized. Upon landing on Mobius, she unded up losing her memory because of the crash. She encountered Merlin Prower, who raised her for a while before Robotnik started to take over Mobius. When Robotnik captured her, she was locked away in a capsule as a prison before she would get roboticized. Thankfully, Sonic arrived to free her alongside other prisoners in the capsule. Impressed with her unusual power, Sonic allowed her to join on his adventure to stop Robotnik. Although they started off as acquaintances at first, they ended up gaining a sibling-like bond as their journey carries on.

Because she was supposed to be the Guardian, she has incredible powers that no other Seedrians had. She can manipulate plant life and use them to attack her foes, all thanks to her Solar Powers. She can also use it to attack foes with energy projectiles if she doesn't feel like using the nature around her. She has super speed like Sonic, though she can't go as fast as her big brother on foot and relies on her Solar Power to use it properly. Since she is a Seedrian, she can also can listen to the voice of the forest.

Thanks to training from Sonic, she can use her Solar Power to fly close to Sonic's top speed. She still has trouble controlling it, but she gets used to it as years go by.

Retrieved from "https://sonicfanon.fandom.com/wiki/Cosmo_the_Seedrian_(Blue_Blur)?oldid=1703449"
Community content is available under CC-BY-SA unless otherwise noted.