Voted Best Joke Character for Spring 2014!
This is an article about Corndog the Hedgehog, the greatest character in all existance. Feel the wrath of his hungry antics as he devours you, your family, and all signs of your very short existence (oh and also he's a character created by TheSkullWolf on 12/2/2013).
Disclaimer: This character is a joke and is not meant to be taken seriously.

<insert your name here> sure does look tasty today.

Corn Dog the Hedgehog is an American with too much freedom and also the hungriest thing alive (and secretly the fastest, but no one knows that). He has the power to eat absolutely anything with no limitations whatsoever. He's fifteen, immortal, and available.

Corn Dog's body is shaped...like a corn dog. His arms and legs look like sticks stuck to his body. He has abnormal hands, each with two thumbs and a finger. His eyes are mustard yellow with black pupils and his mouth is also mustard yellow.  But the most important thing to note about Corn Dog's appearance is that...he's naked. However, he does sometimes wear a top hat with ketchup stains on it and a rip off of Sonic's gloves.

Once upon a time...a chef baked a legendary corn dog in his oven. However, the corn dog came to life (as a hedgehog, yes), ate the chef, and blamed Eggman for it. He then set off on an adventure to avenge his father's death.

This character's fourstat code is 9999

Corn Dog has the power to eat anything...anything...ANYTHING! He can eat his way out of any situation...literally. Missed a date? Eat it. Can't find the remote? Eat it. Going on a diet? Eat it. He's always hungry and can eat endlessly. He also gains the powers of whatever he eats, allowing him to do literally anything.

He can also run faster than every character in the Sonic franchise combined, including himself. This basically means that every time he takes a single step, he causes reality to weep silently in the corner in a fetal position.

When he gets very hungry he transforms into Super Corn Dog with Fries!!! In this form he can eat the ENTIRE UNIVERSE.

His only known weakness is starving to death, which is not possible since he can eat anything, even nothingness.

He ate him. Corn Dog sure does love fast food.

He ate it. Told you he was a hero.

He ate him, though he was later given a stomachache due to emo intensity.

"Unique, but could use more spice. Would definitely recommend to friends. "
—Corn Dog

"Absolutely perfect! The texture, the taste, everything was better than I expect- What? The food? Oh, it was terrible! I thought we were talking about the boots."
—Corn Dog

"A most exquisite glass of wine. Has a sweet and refined taste that those of elite status are sure to enjoy. "
—Corn Dog

"Mustard bottle, I've got a feeling it's not lunchtime anymore."
—Corn Dog the Hedgehog in The Baloney Sandwich of Oz

"Go ahead, make my sandwich"
—Corn Dog the Hedgehog in Sudden Ketchup

"May the figs be with you."
—Corn Dog the Hedgehog in Carambola Wars

"Fasten your silverware. It's going to be a tasty meal."
—Corn Dog the Hedgehog in All About Eggs

"I love the smell of noodles in the morning."
—Corn Dog the Hedgehog in Apricots Now

"A chef once tried to cook me. I ate him."
—Corn Dog the Hedgehog in The Silence of the Mutton

"Say hello to my bread and butter."
—Corn Dog the Hedgehog in Sandwichface

"'Do I feel hungry?' Well, do ya, punk?"
—Corn Dog the Hedgehog in Dirty Herring

Too much for the average mouth

He can really bite

He's got an appetite

Look out when he comes for lunch

Don't doubt what he can munch

He can really bite

He's got an appetite 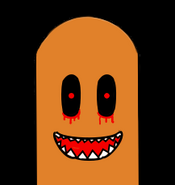 Retrieved from "https://sonicfanon.fandom.com/wiki/Corn_Dog_the_Hedgehog?oldid=1780319"
Community content is available under CC-BY-SA unless otherwise noted.