Core the Hedgehog (   コアク·ザ·ヘッジホッグ Koaku za hejjihoggu) is fanmade hedgehog made by theZewery (Real world creator). Core has 6 spikes on his head as hair with black highlights on them.

Core is selfish and wants to be better than anyone else. He also likes eating and playing video games.

When he is in battle he never gives up even if his both arms are missing. Its probably because he wants to be better than others.

Core has some Nega Wisp's hyper-go-on energy stored in his rings and Nega-Amethyst. He can use them to use Purple Frenzy or Violet Void Powers like Sonic in Sonic Colours.

Dislikes: Eggman Nega, Metal Sonic 3.0, Anyone who is better than him, Chili Dogs, Sonic.exe (Cuz everyone is talking about that), Scourge the Hedgehog

Core was originally neutral until Mr.Egg (You probably know who he is) captured him and brainwashed him. Now he is spy for Mr.Egg (Core calls Eggman with that name or Sir Egg or Mighty Great Egg).

After Mr.Egg brainwashed Core, he gave him brand new Nega-Rings (Price is 999999 rings in a store) that were more powerful than his normal rings. Then Core replaced the rings with his new Nega-Rings.

Later Core somehow (Maybe Shadow failed in Chaos Control! *Awesome Face*) got transported to Moebius where he got very 'warm' welcome from Scourge, who thought that Core was a spy for Sonic and the others (Well he is)

Scourge tried to kill Core because Scourge didn't trust him but everytime Scourge 'killed' Core, he sees another Core somewhere. Scourge just kept killing Cores and everytime Scourge killed one he heard 'I'm here! Why do you keep killing my clones but not me?' When Scourge killed enough of the clones, Core threatened Scourge to use his Violet Void if he wouldn't stop killing the clones.

Core returned to Mobius somehow (Maybe Shadow failed in Chaos Control again!) and he returned being neutral. (I will make up with a reason soon)

Another pic about Core (Base used) 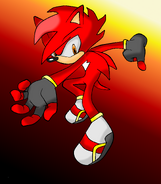 Core before he was brainwashed
Add a photo to this gallery

Retrieved from "https://sonicfanon.fandom.com/wiki/Core_the_Hedgehog?oldid=1799867"
Community content is available under CC-BY-SA unless otherwise noted.