View source
This is an article about Coral the hedgehog, a character created by Megaphantaze on 01/8/2014. 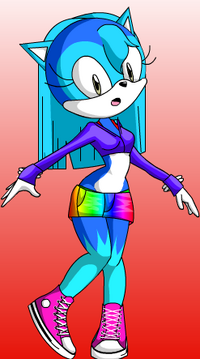 Coral is an average blue hedgehog, who has long cyan hair and ears. some areas on her are cyan, like hands, feet and face. Her attire includes a purple jacket, rainbow colored shorts and pink shoes.

Coral is a big-hearted and kind female. She is a kinda flirty person but generally she likes nature and the marvels of underwater life. She has great respect to water users and she honors all of those whom use water with good intentions. Ironically, she can be tricked with this by evil water users.

Coral once lived in the Baltic sea, where she tried to protect it from pollution and it's obvious reasons: Hazmat the toxic master, created by Yukon the Robot emperor. Yukon though, moved Hazmat to Perish's factory fortress when Sonic and Blaze arrived to stop them in their conquest to take over the world.

Coral though, won this monstrous eco catastrophe and she was given some vacation. Along with Mercho the sea star bot, Coral's most loyal friend, both transferred to Mobius to start a whole new life.

It didn't take long, when Coral met Floodon Flowris , who is one of the calamity masters, and the one who represents sadness. Somehow though, Coral managed to release Floodon from the thing, which made him represent sadness.

Although Coral was hedgehog and Floodon was chameleon, they fell in love with each other and they are loyal for each other.  These two are currently married.

Coral can manipulate water, although she still practices using it. She can also turn into water itself, which she uses, if she is frozen. She can change the temperature of the ice and this way turn it into water and get free. In need, she even can turn the water as hard as rock and use it as a hammer.

Coral has a pet form, which is enabled when someone treats her like a pet and says sweet things. On pet form, she is still able to talk, but her IQ lowers. She is looking for a loyal user who has thd heart to treat her like a pet. When she is ignored, Coral turns back to normal form.

Coral's birthday is on 14.2, which is also Valentines day.

There's is a water spirit living inside the Coral called Wasser. She sometimes takes human form, when she wants to be outside of Coral's body. She is the spirit of Coral's water powers. If Wasser isn't at Coral's body, Coral is unable to use her water powers that moment.

Coral is weak for electricity and pollution. She can't stand garbage and anything else stinky, excluding fishes of course. a water spirit Wasser, Coral's spirit of her water powers, usually wants fresh air and when she is not at her body, Coral is unable to use water powers.

Coral's wedding costume she used on her weddings with Floodon

Coral's old design made by PsuC at DeviantArt 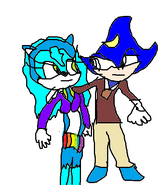 Coral and Floodon together.
Community content is available under CC-BY-SA unless otherwise noted.
Advertisement