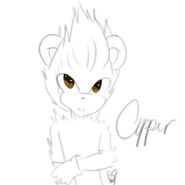 Copper has dark brown eyes, simliar to penny copper, hence his name. His fur sticks straight up into the atmosphere, like a magnet is pulling it up. His fur is a very light gray with a odd sheen of blue. He wears cream colored gloves and brown combat boots.

He is usally very easy-going and nice to hang out with. Loves to have fun and not really think about the past much, though is very worried about the future. When he is ether deep in thought, or tired, he easily becomes angry when others try to provoke him.

Copper lost his parents at a very young age. When he was just a little kit, his parents had made a lot of arguments about how he looks, since his parents had brown fur. He always had anxiety . He never had the guts to even say a word to his parents about anything not even about how he's doing. Then his parents went to the store for a little while, just for a few minutes, they said. He waited minutes to hours to days... Copper was very worried. His parents were away for so long, that he would hug them and cry and tell them how worried he was. 'If they even care...' Copper thought. The next month or so, Copper had been told his parents had committed sucicide. About two years after the events, the 7 year old tried to concentrate on getting money, food and water for himself. That is when he started dozing off. When he finnaly woke up, he was 5 feet in the air.

His powers are very simalar to his best friend , Silver.

When Copper gets really angry, his pupils dilate and smiles evily. This stare actuly startled Shadow.

Retrieved from "https://sonicfanon.fandom.com/wiki/Copper_the_Mink?oldid=1826211"
Community content is available under CC-BY-SA unless otherwise noted.