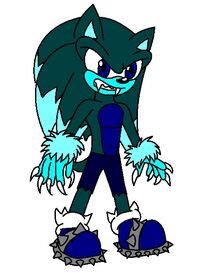 Cooler the Werehog is Cooler the Hedgehog's bestial werewolf-like form in Funky Town. As he is a Gaian Werehog (refered to as Lycanzóch) this form is triggered by the light of the full moon, and remains until sunrise.

It is revealed here that he is actually one of the 12 Werehog Guardians of the Moon, and his title as Guardian is the Frosty Moon Lycanzóch, or Luno Glacio.

Unlike Sonic the Werehog, Cooler's transformation runs in the family, and every male member inherits the transformation. He still has Cooler the Hedgehog's loving heart, and daring soul. He still provides main vocals as the main male vocalist, and serves as the "Beta Male" of the Funky Town Gang.

Cooler's appearance greatly changes, making him more beastial.  Cooler grows taller and he gains much more muscle mass, giving him a sleek, muscular body. Therefore, his chest gets broader, and his arms grow larger. His legs also grow longer and more powerful, and his shoes tear, revealing large feet that stand on their toes (although, his artwork still features him wearing blue kleats). This allows him to run very fast, and jump up to seven feet in the air.  His hands also get bigger and his nails become sharp claws that he can use offensively. His muzzle grows larger as well, his lips are stained black, and his teeth become sharp and pointy. His ears also become more curved. In this form Cooler's skin turns aqua and his fur turns green/dark teal and becomes much longer, thicker and grows out in places where he would not have fur, such as his arms and chest, with traits of white/light aqua fur on his wrists, the end of his quills and dark blue fur on his chest. While as a Werehog, Cooler loses his gloves and shoes, exposing his hands and feet, and his pants tear to a shorter length.

In this form, Cooler lives to his title as the Frosty Moon Lycanzóch of November. A new description for Cooler would be "A gentlemanly Beast". He still has his cool-hearted personality, but has some minor beastial behavior, such as licking wounds, howling, rubbing his head on his girlfriend's to show affection, growling, shaking like a dog, and loosing his temper easier. During fighting, he gets extremely aggressive toward his opponents, and is especially aggressive toward anyone who insults him or his friends. His singing is not impaired by this transformation, so he is still a vocalist.

Cooler first transformed into a werehog when he tried to save Becky from Seducardoro the Tsumi Gaia.  Seducardoro was about to eat Cooler as punishment, but Becky distracted him with a torn curtain, saving Cooler's life. However, the window let the light of the full moon in, while Cooler stood under it. This triggered a transformation into a beastly version of himself. Filled with rage, he brutally attacked Seducardoro and killed his Nightmares as Becky escaped. He since used his new form to help others by fighting monsters and protecting Becky. Due to the Dark Gaia Energy in his body, it used to come every night, until he drank a potion that removed the Energy, minimizing the transformation's occurrence to only the appropriate time of the full moon.

In Werehog form, Cooler gains much more muscle mass in his limbs, giving him a huge amount of physical strength in his arms, as well as being able to run at high speed and jump really high in his legs.

Because Cooler is a NightRiser Werehog rather than a Dark Gaia Werehog, Cooler uses the energy of the Light of the moon to achieve his "Unleashed Mode".

Cooler uses close range combat using his fists, claws, and teeth to deal serious damage. He also takes advantage of his ice powers, allowing him to freeze his enemies at any time.

As a werehog, Cooler gains a great sense of smell and hearing, allowing him to track down prey and hear from a great distance.

Cooler is one of the 12 Gaurdian Werehogs. This gives him the power to summon the moon with a howl. On nights of the Full Moon in Cooler's birth month of November, Cooler's spiritual powers emerge, turning him into Luno Glacio.  In this form, his powers are increased, and he has a new ability "The Luno Howl"; Luno Glacio absorbs the power of the moon into his eyes, and spread a field of moonlight with a gentle howl.

Along with being very muscular, he is also very nimble and acrobatic, allowing him to scale walls, climb trees, and jump very high into the air.

Cooler retains most of his weaknesses in this form, but they are released through an extreme temper that makes him breathe ice that's so cold that it burns. Due to his appearance, he at times is considered scary and terrifying to people around him, making him depressed. This is first revealed during the first few nights when Becky looked at him with fear and terror in her heart, and would not bring herself to see him in this form eye-to-eye. This made Cooler realize that he is a terrifying monster, and his friend was afraid of him.

Retrieved from "https://sonicfanon.fandom.com/wiki/Cooler_the_Werehog?oldid=1790243"
Community content is available under CC-BY-SA unless otherwise noted.