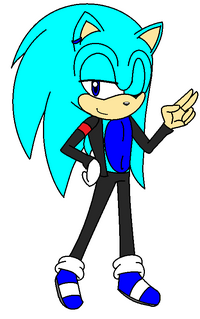 Cooler the Hedgehog is the secondary protagonist of the Funky Town Series.  He is a 15-year old aqua hedgehog, and is the second-in-command of the Funky Town Gang. He is laid back, cool headed, and pure of heart.  He has the specific powers of ice which he uses for attacking, speed by using ice skates, and cooling. A Werehog bloodline is carried in his veins, thus giving him the power transforms into a werehog on the night of the full moon.

He's Becky the Skyhog's loyal and very close boyfriend, and the second leader of the gang.  He is also the youngest son of the alien shape-shifter Asteral, and the Grandson of Hekima, the current Alpha Male Werehog of the Jackson Pack.  As Werehogs are Guardians of Nature in Gaian culture, this makes him one. He's also the main male singer in the Funky Town Gang.

He has also starred in his own spin-off series The Jacksons along with his siblings.

He resembles Sonic, but is aqua blue, has blue eyes, and his chest is blue. His head quills are really long and hang low to resemble hair. He sports different outfits inspired by the bad boy style of attire mainly consisting of a black jacket with a red band around his right arm, a blue earring on his right ear, black jeans and blue shoes. His original outfit consisted of a red short-sleeved jacket and blue jeans.

Cooler, along with his five brothers, is described as a Son of the Stars, and Grandson of the Moon.  He is generally described as 'a gentelmanly, calm and cool nice guy, who is always ready to send the chills'.

He is easy going, polite, and cool-headed at stressful situations.  He finds pleasure in entertaining and helping others. Deep down, he is extremely couragous, and willing to put his life on the line for everyone he cares about.  He greatly cares about his friends, and loves to hang with them to have adventures. However, he can be short tempered when someone intends to hurt or make fun of them.  He believes that love should be forever, and since he met Becky Archive, he loved her with all his heart, making him truly happy since his foster father's death.

Cooler's character is based of the late music artist Michael Jackson and the folkloric character Jack Frost in his personality and in his talents. Therefore, his music types is pop, rock, and R&B.

He is also a really skilled singer and dancer, making him the lead male vocalist for the Funky Town Gang.

Cooler was born Prince Matumaini Jackson, the youngest son of SilverMight, an alien prince of a now-extinct planet, and Princess LaToya of Freedom Island. However, Gaia Kurisutaru was in a conflict with the Furies- monsters born from the sins of the world. Matumaini was captured by a Furie and was taken to the country where Empire City is located. The Furie dropped him at an area full of targets where men were shooting, hoping that he will be shot and killed. However, SilverMight came after them and saved Matumaini, but was shot in the chest. SilverMight flew to a suburban town outside of Empire City, and placed the baby on the doorstep of a family's house. After saying his last words to his son, SilverMight dies, and fades to dust, leaving behind his crystal heart. A hedgehog family with the same last name of Jackson found the baby and adopted him, naming him Daryl.

Suffering under a Stepfather

Daryl had a warm and happy life with the family. His foster mother was Jeannie May Jackson, his foster father was Corbyn Jackson, and he had an older foster brother named Shane. Daryl discovered his ice-type powers at an early age when washing up for bed one night. His parents took it as a special gift, and advised him to use it only when most needed. His ice powers have him the nickname 'Cooler'. Jeannie and Corbyn did tell Daryl that he was adopted, but advised him not to linger on the past and look forward to a happy life, as they loved him as their own. However, when Shane was 11 years old and Daryl was 8 years old, he woke up one morning to find Jeannie crying. Curious and worried, he saw a newspaper and read a shocking report. Corbyn was shot and murdered just the night before. Daryl felt very lonely without his father for the next year. Jeannie eventually met someone else and after months of dating, she married again. However, Braedon Gunner, Daryl's stepfather was a cold hearted hedgehog who equally treated Shane and Daryl horribly with mental and physical abuse. Braedon used unspeakable forms of torture on the boys, and even abused Jeannie. He even forcefully used Daryl's ice powers for his own selfish reasons. This caused Daryl to lose his confidence and become a very distant boy.

Run Away Into Freedom

One night, just after Daryl turned 10, he was in his bedroom sleeping when he heard Jeannie screaming in excruciating pain, and Braedon shouting. After the noise, and feeling scared, Daryl has to see his mother. Daryl found her in her bed unconscious, bruised, and barely alive. Braedon came into the room to go back to bed, calmer now. Braedon told Daryl that she went through a bad accident, but Daryl immediately knew what happened, so he protested against Braedon. This started a massive shouting fight between them, and Braedon snapped by slapping Daryl. He than beat him, whipped him with a thin belt, and choked him multiple times, leaving Daryl covered in bruises. Braedon than threw Daryl in his room and locked the door, trapping Cooler inside.

Two days of fear and hunger left Daryl fearing for his life. That night, he heard Braedon talk to a group of men through the door. They were all laughing and making preparations for a forbidden ritual of darkness to make Cooler a sacrifice to a Gaian Demon destined to bring the Apocalypse to Gaia.

After that call, Braedon went out with the group of friends. Daryl knew that it was time to go. He packed up his belongings and a wallet, used his bed sheets for a rope, escaped through the window, and ran away. He went on a boat that went west of the coast, and found himself in a town on the face of a mountain.

Daryl lived in a motel until December. He was coming home from eating out when three street thugs mugged him. They stole his wallet and the rest of his rings, and they even took Corbyn's watch. Feeling devastated and heartbroken, Daryl hid in a graveyard next to the woods and cried. That was when Balue the Sloth Bear found Daryl. Balue instantly recognized the young hedgehog as his missing godson Matumaini. Balue explained to Daryl that he knew his real parents, and that they made him his godfather. In return, Daryl explained Braedon's abuse, and the reason he ran away, begging for Balue not to take him back to his family, for taking him back to them will mean going back to Braedon. Balue, understanding the entire thing, decided to get Braedon back, so he filed for child abuse.

After months of intense prosecution and investigation, court was in. Daryl explained everything that happened with Balue next to him, while Braedon defended. Daryl even proved it by showing the jury a scar on his back. After the Jury took a long time of thinking, the court filed Braedon guilty, and sentenced him to life prison.

Daryl, Balue, and Shane were all overjoyed, but the physical and mental abuse dealt to Jeannie cost her of her sanity and she was sent to a rehabilitation center.

Balue and his family took Daryl in since that December. Balue became more like a father to him, while his wife Clarissa became a motherly figure to Cooler, and his daughter Raquel "Rocky" was as close as a sister to him. They lived happily, enjoying each other's company. Daryl can talk to Balue or Clarissa whenever he has problems, and above all, lots of needed love. As much as love, Daryl went into his own road to recovery by talking to a therapist, taking yoga, martial arts, and sporting new attire. Cooler eventually healed from his trauma thanks to time, and he decided to take his parents advice to "Not linger about the past, and look foreword to a bright future". By the age of 13, Cooler became a new hedgehog.

Cooler was 14 one day when he was shopping at the mall for a new pair of jeans. He was in Hot Topic when he first spotted Becky Archive. The two of them just looked at each other for a while before resuming what they were doing. Later that day, Cooler caught sight of a group of neighborhood bullies teasing a small boy and Becky. Cooler told them both off, and made sure both Becky & the kid were okay. Impressed by the fact that Becky stood up to them, Cooler introduced her to his gang of friends; they consisted of Conner the Hedgehog, Honey the Cat, and Funky the Echidna. Over chatting, Cooler developed a new friendship with Becky.

He is a skilled singer and dancer, and can ice skate very well. He wields the Elemental Power of Ice, allowing him to use Ice-aligned attacks. These attacks include Frost Kick, Arctic Spindash, Freeze Palm, and Frost Spikes. His more powerful, far ranged attacks include Blizzard, Ice Beam, and the Aurora Speed Attack; the Ice equivalent to the Light Speed Attack. He regularly runs at normal speed, but uses his ice powers to create a path of ice for skating.

He happens to turn into a Werehog on the night of the full moon.  He still retains his hyper go-on powers and ice breath.

His superior transformation is SilverMight, named after his father.

He still suffers the trauma of the abuse from his stepfather and loss of his foster mother, but he keeps his head up to enjoy his life to the fullest.He's been afraid of Braedon and still is.

His ice powers leave him cold at times, increasing his risks of getting sick.

Retrieved from "https://sonicfanon.fandom.com/wiki/Cooler_the_Hedgehog?oldid=1797542"
Community content is available under CC-BY-SA unless otherwise noted.