Start a Wiki
This is an article about Conficker The Hedgehog, a character created by Alphonse Uprising on 05/27/2017. 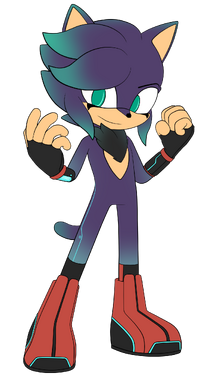 Ji-Hun Song is a South Korean hacker created by German user Alphonse Uprising (better known as Teslarossa ). Born in Bucheon, he has the ability to manipulate the very code and functioning of even the most complicated computers in the world.

His nickname Conficker is derrived from a dangerous computer worm of the same name . Conficker, also known as Downup, Downadup and Kido, targered the Microsoft Windows operating system and was first detected in November 2008. It uses flaws in Windows OS software and dictionary attacks on administrator passwords to propagate while forming a botnet, and has been unusually difficult to counter because of its combined use of many advanced malware techniques. The Conficker worm infected millions of computers including government, business and home computers in over 190 countries, making it the largest known computer worm infection since the 2003 Welchia.

Conficker is a byzantium hedgehog with green glowing eyes. He has short, but shaggy hair with some bangs-- that fade to blue-- sweeping over his left eye, which wears a scouter like Vegeta’s from Dragon Ball Z.

He wears a purple full-body suit with blue highlights that is somewhat covered by a red cape that goes down to his knees.

Ji-Hun is a rather brash individual with a sense of entitlement, always having a mischievous smirk on his face. As a “hitman hacker”, he only does as he is ordered and hacks the computers of his targets, regardless of who, for a small paycheck of a hundred dollars each. Ben is also quite clever, having a couple of tricks up his sleeves, making it very hard to fool him.

Ninel Kapersky is the only other person capable of fighting against Conficker, and the only one who knows his identity. She is a Russian cyborg and hacker who worked for a corrupt cybersecurity organisation called Feliksov Bezopasnost, until she was fired for going rogue. She has since formed her own company, and remains hellbent on seeing Conficker's arrest.

Mercedes-Benz SLS: Ji-Hun was able to buy this car with the some hundred-thousand dollars he was rewarded with after hacking an enemy's military database without getting caught. This car is capable of going up to 322 km/h (201 mph).

Ji-Hun has a special kinetic ability known as “datakinesis”, allowing him to manipulate with the data of computers, from simple pictures all the way to complicated programs.

He can manipulate the binary visible computer information known as data allowing them to collect information about most businesses and organizations and their operations and do amazing things to or inside computers such as hacking and manipulate computer programs.

Merge: Ji-Hun is capable of literally merging himself inside of a computer’s hard drive undetected via worm, allowing him to easily modify, delete, or add anything inside of it. The only problem is, the computer must be on in order for this to work. If Ji-Hun happens to still be inside once the computer goes to sleep, he would be trapped inside. If an anti-virus program detects and deletes him, he would die.

Convert: Ji-Hun is also capable of reprogramming robots with his own powers. With his mind, he can cause bots to spam servers and cause DDoS attacks, manipulate with traffic systems, and cause citywide blackouts. Benedict must be within a mile’s range of the target in order to perform it. The further away he is, the longer it takes for it to work. Sometimes, it won’t work at all due to how complicated or protected the code is.

Hacking: Ji-Hun, who practiced computer language at the age of ten, as a master hacker and is capable of hacking into any machine using an operating system he is familar with.

Retrieved from "https://sonicfanon.fandom.com/wiki/Conficker_The_Sable?oldid=1798341"
Community content is available under CC-BY-SA unless otherwise noted.