Start a Wiki
This is an article about Colt Volver, a character created by Neko Vira. 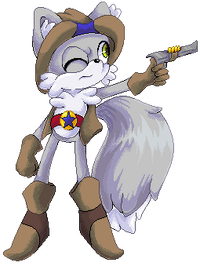 Colt is stubborn and has a high opinion of himself. His quick wit is offset by a short temper and he has been known to make remarks that break the fourth wall. He is also extremely flirtatious and will hit on any females that he deems "foxy". Despite this he is extremely chivalrous and will lay his life on the line to keep a woman safe.

Colts father was Eric,a gun-man and his mother was Kūki, a Demon slayer, both of whom had moved away from their adventures to raise their child. Young Reginald seemed to pick up their skills by osmosis, by age three he had already a natural accuraccy with anything he found. On Colts fifth Birthday his mother sealed herself away in an ancient tablet to protect the world they lived in from evil spirits that may wish her son harm. Unforunatley this didn't stop Robotniks machine army from taking over. His father was taken away from him when he was only 6 and that event hardened Colt into honing his skills and becoming the greatest freedom fighter in the world ten years later. Wearing his fathers hat and wielding his mothers katana and a modified Revolver, Colt took his training to other worlds so he could be strong enough to release his mother from his tablet.

Colts spiritual powers are unmatched back home (Possibly excluding his preoccupied mother) but his control over them leaves a lot to be desired. He can Control enough energy to boost his speed and strength.

Colt's accuraccy at top performance is amazing, he is able to hit any stationary target within 1500 meters. His accuraccy drops after two shots however, as he tends to lose focus. His skills with a blade are equal to his skills with a gun and he can engage in physical combat for a good half hour before he begins to get tired. Colt is also skilled in unarmed combat, using a style that focuses on fast precise strikes, shown very well in his trademark move "The 45. Rush," where he punches an enemy 45 times in just a few milli-seconds.

Colt has studied up on various Mythos upon his travels and he can read various ancient texts that help him expand his knowledge. He can also recognize most mythical beings off the bat (Though he admits that this is normally just really good guesswork.).

Colt is very sensitive about his height and easily looses focus when he hears remarks about it. He also has an intense fear of marionettes.

Dai jū-bi Literally "Tenth Tail" Dai jū-bi is the sword Colt received from his mother, it can dispel hostile energy and transform into a secondary tail for Colt, it is made of Spirit energy made solid but looks like its made of white and regular gold.

Blue Rings Fire Originally "Blue Bullets Fire" Eric's trusty revolver was upgraded by one of Colts friends to use rings as bullets. The gun rarely needs to reload due to it being able to hold 900 rings on its own. Colt still forgets to reload it though.

Hat Colts hat holds a pocket dimension inside it, it is also impervious to any sort of permanent damage making it a perfect storage compartment, however, any damage inflicted on the hat will be transferred to anything living that is wearing or living inside the hat.

Shooting Star Colts Belt Buckle is actually a medal that he earned for his marksmanship skills. It deflects most forms of bullets but Colt wears it only for looks.

-Colt is based on one of his creators best friends and his voice is a variant of that friends own voice.

-Colt's relation to Red Steel Came AFTER his character was fleshed out.

-Colt is an artic fox but this is rarely mentioned by him or his friends.

-He was originally meant to have a southern accent but the real Colt deemed it too ridiculous.

-His being short was a joke by the creator who was taller than the real Colt.

-His name and signature move are both puns on "Colt 45 Revolver" which was his original gun.

Retrieved from "https://sonicfanon.fandom.com/wiki/Colt_Volver?oldid=1780363"
Community content is available under CC-BY-SA unless otherwise noted.