Start a Wiki
This is an article about Colina The Fox, a character created by Mr.gameandfight on 07/22/2013. 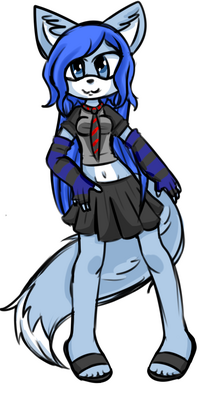 "Don't Put Chocolate In Your Pocket You Idiot!!!"

Colina is a minor supporting character in the Circles of Fate. She is the adopted daughter of Cervantes as well as the adopted sister of Alaina and is a Member of the Zami Family.

Colina appears as a relatively slender light blue fox with long darker blue hair coincidentally complimented with light blue eyes. She dresses as a "Punk Rocker" and sports a gray and black t-shirt with a black and red striped necktie with blue and black fingerless gloves that cover up all of her forearm. her lower body attire is tightened shorts under her skirt rather than regular underwear and wear gray slippers. 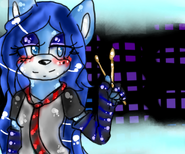 Colina is usually a rowdy, tom boy-ish individual who is always fond of getting into Violent situations such as wrestling, Mosh-Pits, Pub Brawls, etc. Even though Colina is always like this, she always tends to keep a good heart and a keen mind in tact. Also she is extremely friendly and always has good strategies even though she to that point of brightness.

Colina also has certain situations where she will become extremely awkward and have clumsy outbursts. Most situations occur when she meets a male she finds attractive, being on a problem that she can't solve, or being called certain names that she finds as a crucial insult.

Before Adoption with Alaina

Colina was apart of a certain group during the foster care with Alaina. The two started out as a Love-Hate Scenario, in which case Colina had denied all of Alaina's friendly affection. Her and her group were also known for being the most malevolent and misbehaved of the whole foster home. However she had picked with Alaina most of the time but never explained why she did it in the first place.

After hearing about hearing about Alaina being saved by Cervantes from the burning church, it is later shown that Colina had picked on Alaina because she was extremely envious of her. She was extremely jealous of nearly everything she had including her skills, appearance, etc. and wishes she born to some degree as Alaina. Colina later then confronts Alaina about this and soon bursts into tears then ran off.

Colina remained in her room for most of the events with Cervantes and Alaina and only did only few things such as playing with her black widow, or looking out of the window. On the day when Cervantes finally adopts Alaina, Colina sees this through her window and nearly began to sulk into a deep depression in which she sees Alaina run back into the building. Colina then heard footsteps and was soon hugged by Alaina from behind and was told that she would not leave unless she went with her. As Colina was speechless and full of tears, she was told the word "Sister" by Alaina and they both left to begin their family with Cervantes.

Events being in the Zami Family

Colina and Alaina enjoyed being the daughters of Cervantes, but then at times the two prompted their father to go out and date. 3 years passed and Cervantes had came down into depression after going through countless women, until he met a woman named Lemon. Colina honestly thought that Lemon was going to be the same as the others, as in result she never called her "Mother" and addressed her by her actual name, and she prompted Alaina to do the same.

Cervantes and Lemon later on broke up two weeks after their daughter Karin was born, and Alaina and Colina took care of their baby sister. Their father soon met another woman named Ingrid, as the two felt extremely uncomfortable by at all times. Cervantes noticed their behaviors around Ingrid, then told the two to take Karin, find Lemon and live with her due to him saying that he didn't Ingrid to "Lay a finger" on any of them. The three later found Lemon and lived with her for 5 months without Cervantes as they also finally called her their Mother.

After the five months, it is revealed that Ingrid and Cervantes broke up, and Cervantes and he quickly went back to Lemon quickly. Alaina, Colina, and Karin hear about this and the family join together into a group hug and rejoice.

Colina is a very powerful spell caster that uses spells and magic under witchcraft and alchemy. Her fighting style is mainly focused on using mind games and manipulating her opponents which is also combined with her extensive knowledge and past experiences. Most of her attacks are based from going against an opponent and pointing out their elemental weaknesses (example: using fire against ice or wind against fire). She is also capable of using an extremely limited amount of Psychokinesis, and Telepathy, only to the extent of dropping it other uses of magic.

Her spells also allow her to make weapon like substances combined with an elemental spell has casted such as Large Rope Darts, Calibers, Shields, Kunais, Shurikens, etc.

Colina has lived under the influence of Urban Bandits, meaning she has been attacked from behind before. With this being an issue, Colina self teaches herself to use her instincts in battle rather than just attacking in just one direction. Thus this makes Colina extremely skilled in hand to hand combat using her on fighting style that focuses on using head butts, tail smashes, and high leg kicks.

As told, Colina self teaches herself many things. But most of the time she has done alot of skateboarding, and others would be using flexibility for another advantage, gymnastics and a little bit of Ballet.

Colina has a very deep and unknown past, and is very sentimental about it. she always thinks of her entire family's death and anything but. even in battle, if her past is mentioned, she will immediatley blank out and start to take an enrmous amount of blows.

Also despite the fact she's very skilled in both long and close range combat, she's extremely clumsy when it comes to learning new spells, or being in certain environments.

Colina is also extremely gullible and would stop fighting if told about a certain item or place she has never heard about.

and even though Kikime' has trained Colina, and taught her certain moves such as the "Shift" technique, her body can't handle most of the techniques when using them, and if fighting for too long, she will start to tire out.

Retrieved from "https://sonicfanon.fandom.com/wiki/Colina_The_Fox?oldid=1640717"
Community content is available under CC-BY-SA unless otherwise noted.