Trust me, I can injure myself as much as I want, but nothing deals as much pain than Christina ending her thing with me. 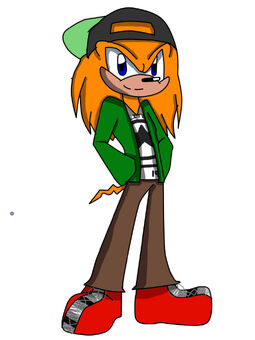 Cole the Echidna is a fan character created by Darkest Shadow. He is a professional rap star and is the best friend of David the HedgeFox.

Cole Nathaniel Stryker is a nineteen year old echidna living in Starcose City. Deciding not to go to college, he is a professional rapper. He is currently working on his first professional studio album, "Unforgettable" at SupaFly Records. It is said that there will be two-three singles on his album.

Cole still remains a skateboarder. Just because he dropped the X-Team because of his label doesn't mean he quit skateboarding. He still likes to ride it to almost everywhere he goes, and ride at the skatepark of his new city.

Cole is seen as mostly a laid-back and very lazy. Relaxed and chill, he has some days where he doesn't have a care in the world about what he does. When he's bored, he would usually just text his friends back on the east coast or watch TV with his crew.

Cole has the typical personality of a rapper. Amazing at what he does, the echidna spits out bars with passion and skill.

Cole stands at 3'8 and weighs 90 lbs. He has tan skin and orange fur. His ears, like all echidnas, are not visible. Fur covers his arms and tummy. He has long dreadlock-like spikes, that go down to a little below the shoulder blades, and a spiky zigzag tail. His eyes are attached, with blue pupils.

Cole wears a green long sleeve unzipped hoodie with a white tee shirt with a grey star inside a circle with writing. For pants, he wears ordinary brown khakis. For footwear, he wears red skater shoes with an interesting white, grey and black middle design and grey laces. To complete the look, he wears a black snapback cap with a green brim.

Attack: 9- Cole is very, very strong for someone his size and age.

Speed: 6- Cole isn't very fast on foot, but is fast when skating or gliding.

Magic: 0- Cole has no magic ability.

Intelligence: 5- Cole is not very smart. Surprisingly, he is sailing through high school.

Accuracy: 9- Cole has great aim and barely ever misses an attack or obstacle.

Stamina: 9- Cole is very energetic, and barely ever runs out of breath.

Tolorance: 6- Cole can easily be tricked into things.

Retrieved from "https://sonicfanon.fandom.com/wiki/Cole_the_Echidna?oldid=1767023"
Community content is available under CC-BY-SA unless otherwise noted.