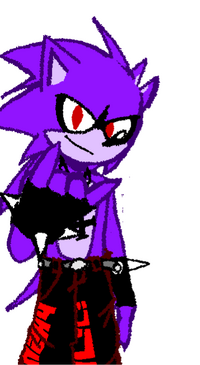 Coldsteel is a purple hedgehog with heather skin and a cut left ear, and his eyes are red with yellowish sclera and are outlined by black skin. He wears a brown belt, black Jinco jeans that are red underneath and cuffed, black sneakers with red soles, black fingerless gloves, black spiked bracelets, and a few silver rings in his quills. His teeth are sharper than average, and his claws are filed. He also wears a black metal inverted cross on a chain.

Coldsteel is an extrovert, though he is often brash and impolite. He’s usually playful and hyped up, but he does have a deadly serious side that not many get to see. When he’s not getting in trouble with “preppies and haters” (the police/lawful citizens) he’s chilling with his best friends and making music.

When Coldsteel’s all alone, however, he has dreams that makes him question a lot of things about his world and his past, which would leave him unsure of what’s worth living for, but when he thinks about his opposition, he remembers.

Among the demons that visit him in his dreams, Coldsteel has his own to face, including his delayed empathy and nihilism.

Waking Up, Blacking Out

Coldsteel was born with a special power, hates his dad and football, and will go on to become the greatest fighter in the Sonic Military, face off against Shadow, and in the end, turn against Sonic himself, lose a part of his ear in the battle, and then ultimately end the Blue Blur's life, with no personal feelings involved, kids.

At least, that's how he remembered it. Coldsteel’s earliest memory since the final battle was that of him floating in a black void into a waterfall, and waking up in an alley nearby a guitar store after the owner poured a bucket of water on him. After trying to figure out where and when he was, he saw someone playing a rock song outside and decided to try himself, so Coldsteel coerced the shop owner into loaning him a guitar and played it for money. After earning enough cash from his exhibits and other possibly dubious methods, he decided to buy the guitar from the owner since money meant less to him. It was then Coldsteel found out from his receipt that he was in the year 2023.

A Rookie Once Again

He would continue wandering the city, making more money as he goes, until he runs into some former members of the Mobian band Sizzling Swatboys that left the band after the war in 2012. They were practicing a new style of rock that was similar to rapcore and thrash metal, and Coldsteel was quickly intrigued. They taught him their skills and introduced him to other rock bands, and he would soon join their new band, Blood Skull 84, which was named after the brigade they fought in.

After some albums were released with Blood Skull 84, the band began to fall out over rivalry with the Sizzling Swatboys. In response to this, Coldsteel convinced what was left of the band to do a cover of Down in It by Magna-Fi for their last concert, but that night, to Coldsteel's surprise, none of the members showed up because they all quit, so he had to improvise and sing the song by himself. He did so well however, that he decided to leave and start on his own.

Due to the fact that he was a Mobian, he had very few opportunities to get signed by the human producers. The xenophobia annoyed him at first, but he decided that the animalistic nature he's experienced was nothing personal, and he learned to live with it and go alone, often resorting to petty crime to make money, until he was arrested and incorrectly sentenced to juvenile detention. After he easily broke out, he was on the run from the police until they gave up searching. He went back to the streets again, albeit closer to Fayetteville, and there he met Samantha Polyweather, playing her guitar. They connected since they were both homeless and alone and didn't feel like they belonged in this world, so they became friends and agreed to start a band together, Sam & Steel.

After weeks of doing less petty crime than before and actually seeing some success with their music, Coldsteel believed that their new band needs a drummer and a better name. By luck, they come across the talented bear cub James playing the drums on his porch and were impressed by his skills, so they asked him to join. James reluctantly agreed, since Coldsteel looked intimidating, but Sam's presence made the two easier to trust to be his only friends. James came up with the name for the band, E-Squad. Later on the trio would sometimes get into trouble with authorities and other gangs while producing mainly rock music.

Those Preps Next Door

One day, Coldsteel and his gang were tagging Miss Eri's house while she was away, but they were caught by Dani, Angel, Xiro, and Axio. The two groups clashed in a battle, and although the E-Squad achieved a minor victory, they fled when Eri came back. Thus begins the E-Squad's rivalry against the Mini-Militia.

He has some kind of umbrakinesis, and is able to control the shadows if he concentrates hard enough.

He can sense whenever Dark Gaia or an Obscurity is nearby, though he doesn't even know what or who they are yet.

He can rap, sing, play the electric guitar and bass, and use his black katana to fight. He is also good at throwing knives and Mobian martial arts, and although he isn't too good at most aspects of art, to say the least, he is unusually skilled at shading. Coldsteel can ride a motorcycle, however he doesn't own one himself.

Coldsteel is of course mortal, and rarely takes things seriously, which could lead to anyone's downfall. He is sensitive to heat and exhausts quickly under it.

Coldsteel has written a total of three songs for E-Squad and regularly featured on the other six for his role in the band. 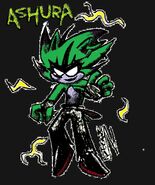 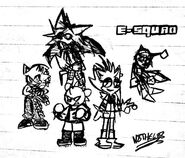 The E-squad in their own art styles respectively. 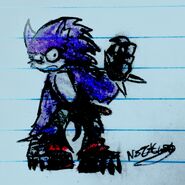 Coldsteel's conceptual Wereheg form
Add a photo to this gallery
Retrieved from "https://sonicfanon.fandom.com/wiki/Coldsteel_the_Hedgehog_(OCA)?oldid=1875498"
Community content is available under CC-BY-SA unless otherwise noted.