Voted Mechanical Lifeform Runner-up of Summer 2015 and Winter 2016!
This is an article about Clock-Watch The Clockwork Hedgehog, a character created by Timesmashaperil on 05/5/2015. 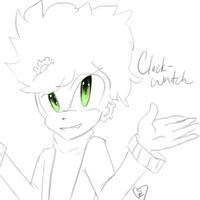 Clock-Watch is a clockwork hedgehog. He is a lawyer and a detective.

Clock-Watch, strangely enough, does not directly resemble any of the species that live on Mobius, though he might have originally meant to be a cat, or weasel of some sort. His fur is orange, and is pretty fuzzy, having a sky-blue natural perm, that is basically impossible to get rid of by any method at all. He is an average height, and at the very least looks somewhat scrawny. He has a few bronze gears sticking out of his limbs and head, mostly at his joints, but he still appears fairly ordinary. He casually wears a green shirt with a brown long-coat and jeans. The coat is custom-made, featuring gear-themed buttons and cufflinks, and has various slits cut to allow his gears to spin without destroying the coat. All of his clothing is altered in this way as well, to keep his shirt from getting caught in, well, himself. He also wears brown boots that are tailored to accommodate the gears that stick out of the bottom of his legs. When in court, he wears a black tux and tuxedo pants. Similar to his coat, his suit also features gear-themed buttons and cufflinks. On top of that, he wears a pendulum-themed tie. When he gets angry, frustrated, or injured, his gears begin to spark, and he puffs out steam. His arm cannon forms itself in a swirl of gears, and is silver and bronze. His power core glows silver, and is in the shape of a cube. When in Overclocked Mode, his gears all change from bronze to silver.

Clock-Watch is an easily distracted person, to say the least. Influenced heavily by the books he read to familiarize himself with society, he has the mannerisms of a detective, always looking around, and making careful observation of anything he comes across. When it comes to talking with people, though... Well, he can be somewhat impatient at times. Sharp in wit, and quick to respond, Clock's instinctual reaction to annoyances is to turn up the sass by about two hundred percent. He has very little patience for people who beat around the bush, or people that give overly long descriptions of things. He asked where the nearest hotel is, he doesn't care about the cute little café across the street, shut up. That's not to say he's always annoyed and snarky, however. He does enjoy goofiness and messing around, just not when he's in the middle of trying to do something. If you're someone he knows personally, he's much more likely to be patient, and maybe even crack a joke or two.

Clock-Watch was originally created by a division of G.U.N., meant to be a 'perfect assassin', a way of getting rid of any problems that might end up in the path of the division. His silver power core was intended to give him constant, relentless power, but there was a problem: it grew, and learned. While some argued that a learning assassin droid would be a force to be reckoned with, others argued that the division needed something more clockwork and reliable, lest it turn its sights on its creators. One of the members of the team, worried for the inactive robot's safety, quickly got rid of it before the other members could destroy the robot eventually to be known as Clock-Watch.

Waking up in a landfill, Clock had no clue who he was, or what his purpose was. Lost and in a daze, he wandered the streets of Station Square, until he decided to learn more about his surroundings, by means of a local library. After a while, he became quite interested in detective novels, and continued to read them. He even got a job at the library in order to keep learning more about the process of investigation, along with the trials that follow. After studying nonstop for months, he took the Bar Exam, and got his official attorney's badge. With his license to practice, he opened up his law office, ready to defend any client seeking counsel. Soon, he would, in the form of his first client, Terra The Fox. Despite it being his first trial, and for murder, no less, Clock was able to successfully defend her by discovering her ability to bend metal and earth, along with discovering the true culprit's electrokinesis. However, he was attacked by the criminal in an escape attempt, and was quite wounded. Luckily enough, Terra was capable of healing him through her metalbending powers. As such, he requested for her to help out in his investigative offices, in case of any more situations like what had happened. As his career continued, he continued to find that many recent crimes were in some way related to some old military incident, with the label of 'GR-D'. The name certainly sparked something in his faulty memory; perhaps it was related to his original purpose? Whatever the reason, he knew that he had to find out the truth of who had created him, and why.

Clock-Watch is a great observer and strategist. He can easily formulate strategies with only a few pieces of information, proving invaluable in his many cases in court. His knack for connecting the dots is quite a lot of help in investigations, as well. However, he is prepared to defend people physically, as well as in the courtroom. Upon entering combat, he can transform one of his arms into an arm cannon, and fire various elements. The cannon is capable of absorbing energy attacks from opponents as well, allowing him to channel the energy into his core for the means of temporarily copying their abilities. Not only that, the core is very powerful, capable of keeping him constantly energized and awake. He is shown to be a great learner, trying to imitate the moves of others in his spare time. His main talent in battle is analyzing his opponent's fighting style. Abilities related to his Magatama will be here.

Clock-Watch in his 'Objection!' pose.
Add a photo to this gallery

Retrieved from "https://sonicfanon.fandom.com/wiki/Clock-Watch_The_Clockwork_Mobian?oldid=1806291"
Community content is available under CC-BY-SA unless otherwise noted.