This is an article about Clash the Lighthog, a character created by TwiShadow on 11/17/2013. 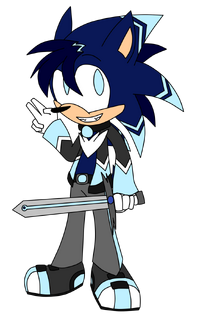 Clash is an average sized mobian with a average build. His main fur color is a deep navy blue with pale light blue highlights. His eyes share the same color as his highlights. These highlights on his fur are completely natural. His skin is a light tan color.

Clash always wears his charcoal colored jacket, it tends to be open most of the time leaving the fluffy patch of fur on his chest exposed. This jacket sports white and light blue highlights at the end of his jacket, and at the ends of his sleeves. Black cuffs line the bottom of his jacket.

Clash's shoes have many colors to them, grey, black, white and light blue to be exact. A very dark grey color covers a majority of his shoes.

Clash is a kind, light-hearted goofball. As such, he doesn't really like to be too serious and isn't very good when it comes to carefully choosing his words. He often comes off as reckless and impatient, always wanting to get started with his normal activities before anybody else has the chance to. He's so full of energy that it's hard to imagine that he ever sleeps! Clash is a very good-natured guy and likes helping others whenever he can. Once he starts helping someone, he won't stop until the job is done. He's extremely persistant almost to the point where it's obnoxious.

Clash, on top of his cheerfulness, is also very headstrong. He's stubborn and reckless, to the point where it's very childish. Most of the time, Clash will jump into things without thinking, and most of the time without being informed on what's going on. He can often turn up in places where he doesn't belong because of this, but if he feels that he's doing the right thing then chances are, he won't stop until he's won. Clash is also a very adventurous soul and enjoys exploring places he's never been to.

Clash is a very loyal friend, and will stick by his friends no matter what. He loves making new friends as well. He's a very friendly guy. He's even persistant when it comes to making friends, not stopping until the person he's trying to make friends with agrees to be his friend. He can come off as annoying sometimes with all his joking. He loves goofing around and making jokes. He loves it even more when people laugh at his jokes and goofing around. He likes seeing people smile in general, it makes him happy.

He has a fear of being alone.

(I will be working on this after I finish and publish everything else, so check back later if it isn't already on here.)

Clash was born with the ability to control a special type of energy, it doesn't seem to be chaos energy though. It's unindentifiable. Whenever he uses his energy powers, the pale light blue markings on his body and the orb on his choker will glow. The intensity of the glow depends on how much power he is putting into his energy power. If it is just a little bit, the glow will be extremely faint but if he is expending all of his power on his energy manipulation then the glow can be almost blinding. The blinding glow is extremely rare and when it does happen it's possible that Clash could die from overexerting himself too much.

Clash is very skilled in using his energy manipulation and often uses it to fight with whenever he does have to fight.

Clash was born abnormally agile and dexterous. He is very good at preforming acrobatic feats because of his agilty combined with his dexterity. He is also very hard to catch because of these two abilities. He is very quick and dodges attacks rather well.

Though he is not nearly as fast as Sonic, Clash is still pretty fast. His top speed is unknown at this point but he is a master in speed. Clash is very good at controlling his body and direction at very high speeds. Not much else to say about this skill. He's just fast.

Clash is very good at wielding a sword. He wields a single short sword. He is devastating when he wields this sword, able to cut up his foes at high speeds combined with his energy powers.

He often cloaks this sword in his energy power, making every cut burn immensely.

He trains using this sword everyday so that his skills are always as sharp as they can be.

Retrieved from "https://sonicfanon.fandom.com/wiki/Clash_the_Lighthog?oldid=1493017"
Community content is available under CC-BY-SA unless otherwise noted.