Start a Wiki
This is an article about Clara, a fan-character created by Chica Nunnally!

The author of Clara the Echidna considers this page to be unfinished. As such, some sections may change. 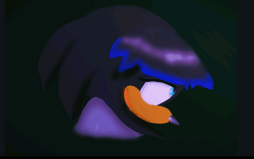 This character is currently owned by Julia Finitevus.

Clara is a female echidna who lives in the same post-apocalyptic timeline as Silver the Hedgehog.

Clara is a female echidna with black fur and ice-blue eyes, her bangs colored cerulean-blue and tipped in midnight-blue.

Clara is usually very skeptical of anything mystical and mythical. She usually fiddles with objects when nervous about something. Clara can also be a bit absent minded, only paying close attention to the world around her when there is great danger. She also hates loud noises, including rusty doors that squeak. Clara is a gentle-hearted female, not hot-tempered like some people are. She is very sympathetic with other people as well.

Clara often tries to relate to others with experiences of her own. When confronted with a staggering situation, Clara's mind usually goes blank. Clara also loathes being pranked by others. She hates it when people are cruel to one another and tries to stop it. She is also willing to risk anything and everything for her friends.

Silver the Hedgehog- Silver is like the brother that Clara never had.

Clara is quite effective at archery, the arrows that she fires usually hitting their mark. She is also good at some acrobatics, albeit not all.

Retrieved from "https://sonicfanon.fandom.com/wiki/Clara_the_Echidna?oldid=1780677"
Community content is available under CC-BY-SA unless otherwise noted.