Start a Wiki
This is an article about Citrus the Bear, a character created by Alphonse Uprising on 02/18/2018. 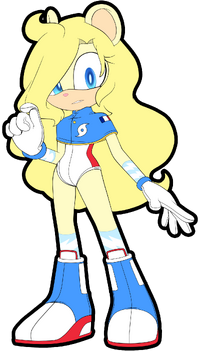 B-Bonjour, good sir! O-Or ma'am, whatever you'd like to be called!

— Citrus de Lasaux, when visiting her shop for the first time.

Citrus de Lasaux is a polar bear from Grenoble, France. She owns a small shop in Paris where she sells useful items like ring packs, speed shoes, shields, and more. Citrus has cryo-aerokinesis, or the ability to manipulate with cold air.

Citrus is characterised as being incredibly shy, despite owning a shop.

Citrus is the daughter of former Neo-Knights agent, Matthias de Lasaux-- also known as STORM-101 by other members.

Cryo-Aerokinesis: The manipulation of cold air.

Surfing: This allows her to "ride" the air at very high speeds, as long as it's cold enough.
Push/pull: Using manipulation of strong winds, Citrus can push or pull heavy objects, similar to telekinesis.
Tornado: Citrus spins so quickly that she creates winds fast enough to form a miniature tornado. Objects, including people, are sucked into the mini-tornado, and thrown out in random directions to deal blind damage to its unfortunate targets.
Freeze: Citrus can use her icy breath to freeze liquids, allowing her to walk on them.

Warmth: There has to be at least a little bit of warmth in order for her powers to be effective.

Retrieved from "https://sonicfanon.fandom.com/wiki/Citrus_de_Lasaux?oldid=1829675"
Community content is available under CC-BY-SA unless otherwise noted.