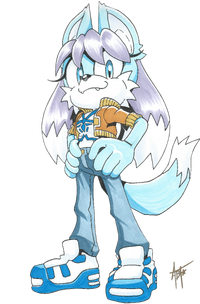 I almost lost it all once. You have to enjoy every little moment as if the next could be the last.

Ciel Mackenzie Fay is a Mobian fennec working for OmegaCorp as one of their head scientists. She nearly lost her life in a terrorist attack, forcing her to become a cyborg in order to survive.

Ciel was born in 1984 to a middle-class family living in the coastal city of Luxerna. She was mostly self-driven in her education, having a natural curiosity and an aptitude for learning. She was also quite attractive, though she didn't put much effort into her appearance beyond her normal grooming. She was called a nerd by some, but she often shrugged it off and even took it as a compliment sometimes.

When Ciel was 15, she met Jameson Fay⁠—a lynx, a fellow nerd, and the love of her life. They took all their classes together through high school and college, and eventually took an internship at OmegaCorp. Astounded by their combined intellect, OmegaCorp offered them a paid scholarship and a guaranteed spot in their research team. They gladly accepted.

Five years later on September 10, 2004, Ciel gave birth to Nemi Harper Fay, not long after she and Jameson—now married—moved to Odyssey for their new job. Everything seemed to be going her way: A loving husband, a beautiful daughter, and her dream job secured. It seemed like nothing could go wrong.

Ciel is a youthful, rather attractive fennec fox. Her fur is light blue with white fur on her ears, chest, tail tip, and feet. Her hair is purple and parted mostly towards the left, reaching down to her shoulders in the back with two much longer segments of hair on the sides of her head that reach halfway down her chest. She also has blue eyes and pink skin.

Following her conversion to a cyborg, her appearance remains nearly unchanged aside from a barcode on her forehead, which is mostly hidden behind her bangs.

Ciel's casual attire consists of a gold-and-black short sleeved jacket worn over a white camisole featuring a light blue print design. Both the jacket and the camisole are cut very short at the bottom, exposing her midriff. She also wears blue jeans, white and blue trainers, and white socks.

Ciel is a chatterbox. She is actually quite talkative--sometimes, a bit too much for her own good. Her mind can wander off and she catches herself adding things to the conversation that probably should've been left unsaid. This is just an example of her tendency to be reckless, though in her defense it doesn't stem from ignorance. She is well aware of her limits and capabilities, but she fears that prioritizing safety will cause her to miss an opportunity to take advantage of her abilities. She benefits from her ability to be resourceful, so this tends to work in her favor. She's not one to forget the occasions where it hasn't, however...

Ciel rarely plans ahead of time, and prefers to dive right into the task and plan as she goes, even if she already knows what will happen. She understands how a plan inevitably changes as it is put into action, and that the situation can change with each step. She also believes this is the most efficient way to work.

Ciel frequently ignores the warnings of others, and insists that she holds true to her actions and do what she believes is right. While she's reluctant to let others challenge her actions, she is prepared to take full responsibility for her mistakes.

She takes great effort in bonding with others, and often encourages them to take advantage of their day. She's relatively easy to get along with, as long as she's not terribly busy with some other matter. While she seems to lack any reaction to insults, she does harbor some amount of scrutiny towards people who do insult her.

In contrast to OmegaCorp's other combatants, she seems less concerned about preserving life than she is about finishing the job. This seems natural since her career path focused on research rather than fighting, but she also believes that eliminating the threat quickly is the best option for survival. However, she has been known to shield others if no other option is present.

Since her conversion to a cyborg, Ciel has become a natural Chaos user. She's still exploring the extent of her abilities, and it's currently unknown if she's able to turn Super.

Her main means of attack involves summoning blades of chaos energy. They come in various shapes and sizes, and are sharp enough to cut through steel. They are often used as projectiles.

Ciel is able to open dimensional rifts that alters gravity in any given direction. While mainly used for utility, it does have a few offensive uses.

Ciel's cybernetic body is both unique to her and is generations ahead of most cyborgs in terms of technological advancement, granting her some resistance to their most prominent weaknesses such as EMP. Even then, however, it is still far more effective against her than ballistic weaponry.

Retrieved from "https://sonicfanon.fandom.com/wiki/Ciel_the_Fennec?oldid=1862394"
Community content is available under CC-BY-SA unless otherwise noted.