Some scars never heal, but they all make us who we are.

— Chrysa Cordelia Wildwind
Chrysa the Cat (クリサ・ザ・キャット  / Kurisa za kyatto) is an anthropomorphic mobian cat, who was one of the only mobians escaped the destruction of her small, and calm village. Now, she chases Zetsubo, a Griffin who set out to use the power of the blood of Sycro Watermist, which is the only way for him to gain power from the Watermist Crystal.

This character belongs to: Kurisa-Kyatto 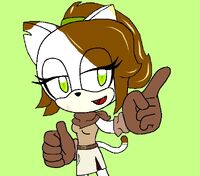 Sister - Feather Juniper Wildwind
Affiliations
Member of Corona Wood Warriors
Personal Info
Likes
kind and understanding friends, nature, quiet and breezy places, and watching her sister use a bit of aerokinesis (the ability to manipulate the wind)
Dislikes
loud and crowded places, annoying and stupid people, strangers revealing her soft side, and letting others down
Friends
Feather the Cat, Reneesme the Ferret, Darkar the Wolf, and other close friends
Foes
Zetsubo the Dark Griffin, and Bloodrayne the Bat
Romantic Interests
None
Occupation
Corona Wood Warrior
Skills and Abilities
Skills
Agility, climbing, and gymnastics
Abilities
A great sense of smell, and a great sense of hearing
Powers
Chlorokinesis
Weaponry
Dagger
Other Info
Birthday
September 13
Favorite Food
Strawberries

Chrysa is a female mobian cat, who is 98 cm tall, and weighs around 29.5 kg. Her fur is white, and her hair is mixed between brown with a few strands of pale yellow. Her eyes are bright lime green, which are above her very pale yellow muzzle. Beside her mouth and on the left bottom of her muzzle, lies a somewhat faint and triangular scar. Her ears are brown, and her left ear has an old and small tear in it. Her tail is white, and her tail tip is dark brown, with one pale yellow stripe separating them.

Chrysa wears a plain tan sleeveless crop-top. Above her cream-colored skirt, Chrysa wears a sort of small belt, with one slot to fit her dagger, and a dull golden buckle (not made of real gold). Her skirt has one pocket, and one tear in it. Her skirt is connected to maroon-colored shorts underneath. She wears a dusty brown scarf, which has a leaf-like tie behind it. Her gloves have a similar style, since the wrist-part resembles the scarf. Her gloves are dusty beige/tan (I'm not very sure what color it's called), with one having her Watermist Crystal on it. She uses simple, beige-colored boots, which have black-brownish soles.

Chrysa is generally an introverted person. She can’t really stand loud and crowded places. Chrysa is more of a loner, and prefers to work with little or no people. She’s quick to think and act, which can sometimes lead her to quick judgement or misunderstandings. Around strangers or people she isn’t close with, she can get quite serious, and she won’t be tolerating many jokes...

Once you get to know her, or you’re her close friend, Chrysa is more of a relaxed person, because she believes a friend wouldn’t judge her for her soft side. Chrysa tries to be the strong and serious girl in society, but alone or with companions, she’s caring and calm.

Chrysa was born on the 13th of September in Watermist Village, near Mystirea Wood. At the age of three she received her Watermist Crystal, when she learned she had the potential to do something great someday. Starting at the age of 5, when most mobians of her village started training, she started to learn to battle with her father. For two years, she trained every day, except for Sundays, in Mystirea Wood. Sometimes, her younger sister, would watch.

On the morning of Feather’s first day of training, (aka Feather's 5th birthday) the sky was dark. Zetsubo invaded their village, and either killed or captured those who weren’t strong enough or quick enough to escape. Chrysa and Feather were the only two out of six mobians that escaped. The other four are unknown and missing. Their mother, Sakura Wildwind, handed them two things the help protect themselves out there if the defenders failed to save the village. She handed Chrysa her silver dagger, and handed Feather and long, wooden, decorated pole she would have received from her father if they were going to start her training. As their parents sacrificed their lives for the sisters, Chrysa and Feather ran far away, and never saw their home peaceful again.

After they ran for quite a while, the ground slightly shook. Both of them looked back, only to see a blazing fire from an explosion rage through their homes. In the distance, a huge army was scampering away to an unknown area. Zetsubo was laughing like all the villains do. Chrysa didn't really remember what happened afterwards. All she could recall was Feather crying for the rest of her birthday.

Chrysa and Feather ran far away to Corona Wood. There, for many years, they trained together, and survived together. Feather was mentored by Chrysa, while Chrysa tried teaching herself and practicing herself. Chrysa feared the village nearby, Iris Town, may keep them hostage, or torture them, so Chrysa insisted to stay in the forest, for their safety.

When Feather turned 7, and Chrysa was 9, Feather fell seriously ill. Chrysa knew Iris Town had the equipment and medication her sister needed to survive, so Chrysa carried her sister into the town for the very first time. She feared it may be the only way to save Feather. Iris Town gladly cared for her sister, until she felt all better.

Chrysa and Feather currently live in a small hut near Corona Wood, but connected to Iris Town. They still train with each other in Corona Wood Warriors HQ, which is located in the forest, in a position only the defenders of the village would know.

A good sense of smell - Chrysa inherited this from her ancestors. Normal cats have this ability, to help them differentiate between poison and food. Chrysa uses it for the same reason when she’s out in the forest looking for berries.

Great hearing - Cats back in the days used this ability to hear for their prey. Chrysa uses this to help her hear if any stranger is nearby to ambush her (but if you’re really quiet, you might still have a chance…)

She isn’t very strong, but it’s enough to hurt a somewhat weak enemy.

She is very vulnerable, especially to attacks which deal a lot of damage.

She is quite fast, although not as fast as the speed of sound,  all because of her training with her father and herself in the forest.

She has learned to dodge, and she has very quick reflexes.

She is only slightly above average, but she is still smart and wise enough not to trust strangers easily and other stuff like that.

Her skills are average.

She has a lot of stamina, due to the fact that she needs a lot to keep herself dodging her opponent’s attacks.

She is an introvert, and interacting and persuading other people is very difficult for her.

She isn’t the greatest at magic, but she knows enough to use a bit of chlorokinesis (the ability to control and grow plants)

She has average accuracy.

This character's fourstat code is 4786

It's a silver dagger, passed down from her mother. I don't really know how to describe it, so there'll be a picture on the right… later on when I make one… (for now, say it’s a fatter and shorter version of the Silver Dagger in Miitopia because that’s where I got inspiration from.)

All villagers of Watermist Village - before the village itself was destroyed by  Zetsubo - received this stone at the age of 3. (The Watermist Crystal can still be found deep within the earth, however) If the stone finds the blood of Sycro Watermist, it will engrave a waterdrop symbol on itself, and will grant the user one wish (with some conditions, of course). Without the blood of Sycro Watermist, the stone will have no effect on the mobian. If the crystal finds the user important in the future (with or without the blood of Sycro Watermist), then it will grant the user one (slightly weak) elemental power, which can be unlocked through a lot of training. The crystal will engrave on itself a sign special to the user himself/herself. Each mobian that is able to use the stone can only have one. Chrysa’s sign is a leaf.

A Pack of Berries -

This is pretty self-explanatory. Chrysa carries it for snacks wherever she travels.

She just carries it with her sometimes to past the time.

Slicing Dash - The user runs and holds his/her weapon out. This slashes multiple enemies at once, but since the attack isn’t very concentrated, the damage dealt isn’t that high.

Spin Slash - The user spins in a circle, holding his/her weapon out. Nearby enemies surrounding the user get hit, but this attack doesn’t do a lot of damage.

Hard Blow - The user jumps high into the air, and slams down, smashing the enemy’s head with his/her weapon. This does do a bit more damage than other attacks, but it’s hard to do, especially on swift enemies.

Growth - The user grows a specific type of plant from the ground.

Retrieved from "https://sonicfanon.fandom.com/wiki/Chrysa_the_Cat?oldid=1821178"
Community content is available under CC-BY-SA unless otherwise noted.