Pianoteen, the author of Christina the HedgeCat/Tales of the Echo, considers this page to be unfinished. As such, some sections may change.

If you need new clothes, then just tell me and we can come down to Mariala City and you can shop for free in my boutique. I can't just let you sit out here if you hate your outfit and you think people would laugh at you for it... 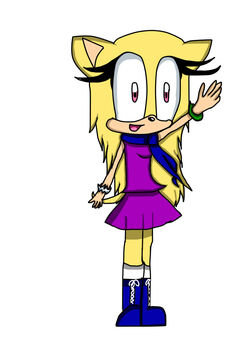 Christina the HedgeCat is a 15 year old hedgecat fashion star from Mariala City is a fan character created by Pianoteen. She is the cousin of Neo Tranquil the Fox, and a frequently recurring character in the Tales of the Echo series.

Christina's very early life was never really explained yet. It is known that she is the son of Carly the Cat and Gold the Hedgehog, and she is the sister of Lina. Her parents are divorced, and her mother found lo luck trying to find someone else.

In the first episode of Tales of the Echo, Christina makes her debut appearance in "Plastic Problems" along with Krys the Alicorn. Christina, along with Neo's group had to figure out why everything plastic was being manipulated, and how to stop it.

In the second episode, "A Small Ruckus", Christina reappears somewhat later on in the beginning of the episode, but currently, nothing is known about what she has done yet.

Many episodes later, in "A Noble Effort" Christina makes another appearance in the beginning.

She hasn't appeared in an episode in that season since...

In Shadows Gather, Christina makes a shocking return to the series after a rather long hiatus. We don't know the cause of the hiatus, but she helped save Saren from Moros, the mage, and the Knight.

Christina is very modest and altruistic. She hates being a braggart, and she never makes someone feel bad about his or herself is she is any "better" than her. She also doesn't really like when people call her the best because it makes other people think she's a mean boastful girl.

Christina is also a very friendly face. Being well known throughout the world from her pageants, and being on the cover of magazines and games, she seems to be one of the more kinder celebrities.

Christina currently stands at 3 feet and 3 inches tall. She has a pale golden colored fur. Her hair is straight goes down below her waist. She also has pink eyes, which sometimes turns a bit red when she cries. Her skin underneath her fur is peach. She has no fur on her arms, and fur covering her tummy. Her eyes are not connected, and they are pretty big. She has two eyelashes on each side. Her tail is cut short, which would usually be the size of a regular cat's. During the winter, her fur and hair become more vibrant/brilliant. She also got a haircut to keep her fur even warmer.

Currently, Christina wears a purple tank top shirt, and a matching purple skirt that goes down to about her knees. Above it, she wears a blue scarf. For footwear, she wears white long socks and blue boots with white laces, and grey soles with no heels. Somewhere in the series, she has acquired two bracelets, one shaped like a leaf, and one shaped like a bunch of crystal shards.

Christina's trademark javelin, the Beauty Javelin, has also been brought to the Tales of the Echo storyline. She uses it for several purpose;like throwing and striking it at opponents for attacks, and rapidly spinning it for defense. She can also deflect projectiles by hitting them like a baseball back. However, this could sometimes break her javelin, taking seven hours to regenerate itself.

Christina happens to be a trained chlorokinetic. She has the power to manipulate any kind of form of nature with her hand. Usually this would be good as a defense strategy to guard herself from really sharp attacks, or to attack with a vine whip or leaf tornado. With her leaf shaped bracelet, that can either conceal or strengthen her florokinesis.

Christina also was trained in crystalkinesis. She has the power to manipulate crystals with her hand. It could be one giant crystal, or multiple small crystals. This is usually a form of offense to summon razor shard blades to her opponent, and it can also imprison someone in their space for crime purposes.

To learn more about Christina outside Tales of Echo, click the top link above.

Retrieved from "https://sonicfanon.fandom.com/wiki/Christina_the_HedgeCat/Tales_of_the_Echo?oldid=1853194"
Community content is available under CC-BY-SA unless otherwise noted.