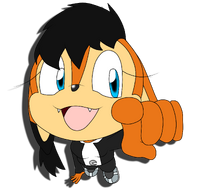 Chrissy (full name Christina), stage name DJ Ilves, is a lynx who aspires to be a mashup DJ.

Chrissy is a light brown lynx with light blue eyes, cream-colored muzzle that extends over her eyes, and inner ears. Her ears have black ends and tufts. are floppy and  She also has an overbite fang. On her tail is a black mark. She wears a black jacket with a white shirt with a cresent moon graphic, black pants, and gray shoes.

Chrissy is very upbeat and always ready to have a good time. She loves music, and it always puts her in a good mood.

Growing up, Chrissy has always loved music. She has listened to a vast array of genres of music, from hip hop to hardcore. She has dreamed of bringing different types of music together through mashups, and that's when she began to make music. At 15 years old, She began making music with different digital music programs, taking different songs and putting them together. At that point, she believed she could use her talents elsewhere, so when she got older, she sought out the dream to be a mashup DJ at parties and clubs.

Chrissy is very skilled at making music and DJing, starting it at a young age.

She hates being without her music. Complete silence or boring situations make her uncomfortable and tired. 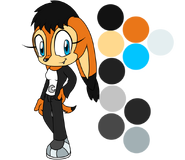 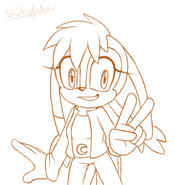 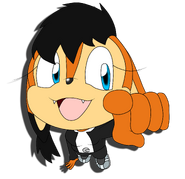 Add a photo to this gallery
Retrieved from "https://sonicfanon.fandom.com/wiki/Chrissy_the_Lynx?oldid=1654161"
Community content is available under CC-BY-SA unless otherwise noted.