Start a Wiki
This is an article about Chris the porcupine, a character created by Bobothemonkey321.Questions or comments Plz type it in The comments box 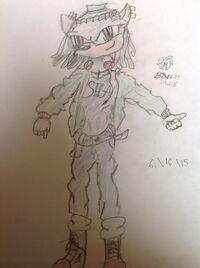 "When I look at people from what I see,they gotta know that life's a scary thing with new experience,I had to learn that the hard way,losing friends, making or breaking a career, and seeing your friends or family almost letting thier lives go.but we have to stick with the good things we have,who knows.it might help us defeat our enemies.fear and evil."

Chris has brownish skin and black fur and dreadlocks.he also has a cross necklace,brown eyes,and a short tail.for his under attire,he has camo cargo pants and a gold "fear God" tank top with a red vest.and he wears normal Nike shoes.

Chris has a positive and cocky attitude for a rapper and a hero.but to some people like vector, his manager is dead to him. He doesn't swallow what ANYONE wants to say about him that's insulting. In any sad conditions,he tries to put it in a positive or in a good feeling.

As a child and when with his parents still Healthy and alive.his dad was a pastor and his mom was a choir member. So when they're happy, Chris was happy too.but in school he was mostly bullied.they stole his lunch money and homework, and hurts him because he was an puny little porcupine.when he noticed that he was born with extended hair,he learned how to use it for good.and thoes bullies were on his side now doing nice things.

Christian now known by his rap name €#R¡$ has made 2 Aubums and 30 songs.his greedy manager, vector made him do anything that he can't do.so when they were going to Tokyo,Chris stopped the car and made vector get out. After one concert in station square, he met Debborah Rose.the two really liked each other and they started dating. Something went wrong. Debborah wanted Chris for his money and when he figured out,he decided to let her go. But the couple came back again because they really missed each other.but she lied to Chris again And the next day, she stole 5k of the money he was gonna preform for the childrent at a hospital.that performance didn't happen because of her.he broked up with her AGAIN and decided they're never gonna see each other.

His parents were gone, but concerning to him now Team Bobola is like a step family to him that allowed him to be adopted for free.but ever since bobo passed, everything changed.but now he was will accompany Jamie

Chris' weakness is something that also gives him powers:his head.either from partying to hard to crash,his hair stretch abilities and his plans in Martial arts

Album: out with the old,in with the new

Note:you can add any song featuring you

Reach for the stars-miku ft. Chris

Retrieved from "https://sonicfanon.fandom.com/wiki/Chris_the_porcupine?oldid=1801219"
Community content is available under CC-BY-SA unless otherwise noted.