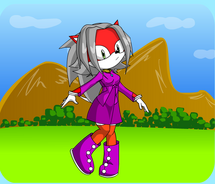 The Elder of Frog Village (Former)

Chrai the Hedgehog was born to a very rich king and queen. At the age of seven she wanted to live life as a normal girl and ran away from her kingdom leaving all traces of royalty behind. On her way to the jungle she found a boy named Mahai whom had banished himself from the jungle due to his dark childhood. Chrai talked some sense into him and the two set up tent in the middle of the jungle and started to live together. Each day Chrai would teach Mahai about the world and Mahai would make sure Chrai wouldn't get killed.The two found other sick and lost people and took them to their campsite the two then made a campground in which would become Ario village. Soon the two became teenagers and Mahai started to make a training school for all the sick and homeless people soon becoming a dojo which could possibly be considered the best dojo ever created by one man. While Mahai perfected his dojo Chrai started to fight in wars to ward off other towns and make her campsite bigger attracting even more injured and homeless people due to the intense war. The campsite wasn't even a campsite anymore it was practically a town. In the midst of all this Chrai and Mahai started learning about each other, how alike they were and their puppy love started to melt into intense romance. Soon Mahai and Chrai's first son,Artixunio were born. He was their prize child that being said they trained him to the limits into training beyond your worst nightmares but he turned out pretty okay at the end. Due to his training he was and still is the youngest one to get a black belt. Then Agega was born but his parents were still super proud of Artixunio so Ageha became a bit jealous and trained HIMSELF to be extra strong. When Ageha's at his maddest he far suprasses Artixunio's base form but even with that fact his parents still love Artxunio more. The two became experts at hunting and most of the hunting relied on them soon the two would make Chrai and Mahai really favored among the village and they were elavated up to headmasters. After Artixunio and Ageha were hunters Malita was born. She always had a knack with electronics and knick-knacks. Soon she would collect all the litter and make a power supply for Ario village which was much appreciated by her mother and father. Then Claura was born and to her dismay, was given the title of Malita's assistant. Then the dynamic day came when Mahai was murdered. Chrai was left in shambles when her children left due to their sadness. They then came back with hope. Artixunio became a G.U.N. agent along with Ageha. Malita became a technician for G.U.N. knowing it was her true purpose and Cluara became a waiter...without much success.

Soon Chrai remembered what it was like to be queen and took full control of Ario Forest and made it Ario kingdom. Now present day she's very noble.

The Elder of Frog Village -The two met when at the G.U.N. base when The Elder was visiting Krinkinko and Chrai was visiting Artixunio. The two started flirting with each other than started eventually dating. Then one date Chrai asked the Elder his age. The Elder told her then Chrai got real freaked out,slapped him, dumped him, took his dinner and stormed out the restaurant. The Elder will occasionally flirt with her but that ends him with a rock on the head and a broken leg.

Rageston - Years ago Rageston was once pretending to be injured to lure people into the crystal realm. Chrai once found him and he fell madly in love with her. Chrai started to have feelings for him too but she couldn't leave her family. Even so the two started secretly dating until Chrai realised what she was doing was wrong. Rageston wasn't happy one bit he really started to love her so when Mahai was sleeping one night Rageston snuck in and started making out with Chrai and Chrai didn't stop him but Mahai woke up and beat the living sh** out of Rageston and Rageston fled. It is unknown if the two still have feelings gor each other.

Artixunio the Hedgehog - Artixunio is Chrai's favorite child and she's always over protective often ti lunatic example. A primkme example is when Artixunio twelve Chrai saw him and the girl he liked making out under a tree. Chrai then used a flame thrower on her, shot her with a machine gun, bit her head off, used her head as a baseball ran her over with a truch and then to top it all off threw her corpse in a volcano. Now even though Artixunio loves his mother he gets fairly irritated at her easily. Especially since she even tried to kill his new girlfriend,Cecelia. This is all because she loves him the most though this ticks off all the rest of her children.

Ageha The Hedgehog-Ageha is Chrai's second favorite only to Artixunio himself this angers Ageha and as a result always tries to best his brother. Unlike Artixunio Ageha listens to each and every one of Chrai's commands.

Krinkinko the Hedgehog -One day Krinkinko and Cluara where on a date and Krinkinko started to make out with Cluara then Chrai started to burn and attack Krinkinko while he was making out but Krinkinko was too in the moment to be hurt so she gave up. By the time he was done he passed out. Freaked out,Claura told her mom about Krinkinko making out with her then Chrai and all of her children jumped Krinkinko in a dark alley and brutally murdered him. Luckily Fa-La-Stu came right after Chrai's family left and healed Krinkinko.

Cluara the Hedgehog- Chrai's least favorite child and as a result she gave her the position of Malita's assistant. Cluara acts horrible towards her mother but comes to her for guidance from time to time. Strangely even though Cluara is hher least favorite child she ended up killing KRinkinko just because he made out with her.

Malita th Hedgehog- Chrai's third favorite child and first girl child. At a fairly young age Chrai spoiled Malita and that's how Malita came to learn about mechanics. Even though she loves Malita when Chrai goes to the G.U.N base she visits Ageha and Artixunio more often.

Going to many wars she became very skilled at all weapons in particular any sort of guns. Like her children she's skilled at using fire but it's not as powerful as her children. She also can charm males that are near her age. When she's extremely angry she turns tp her mini-super form, Berserk mode. In this mode her speed, strength and fire power is multiplied by six. In this form she is known to kill her opponents (Example:Krinkinko). The form lasts 30–60 minutes after the form is gone she gets real sick for three-six days and suffers extreme vommiting and painful diarehha.

She was very timid when first creating Ario Village and with her children very over protective.When it comes to when she grew Ario Village into a kingdom she grew very lonely possibly providing a reason for her overprotecting her children

She appeared in Roleplay:The Royal Party when Fa-La—Stu reminded Chrai of her past as a queen and that's when Chrai decided to change Ario forest into Ario kingdom. 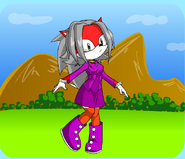 Chrai
Add a photo to this gallery

Retrieved from "https://sonicfanon.fandom.com/wiki/Chrai_the_Hedgehog?oldid=1830092"
Community content is available under CC-BY-SA unless otherwise noted.