Start a Wiki
This is an article about Chester the Chespin, a character created by KatieTheHedgehogXD on 04/19/2015. 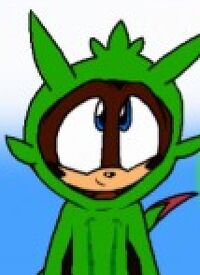 Chester is a small child, appearing to wear a green hoodie. The back of his hoodie is stiff, and hard. He has 7 quills on the hood part of his sweater, with are soft and flexible, but become stiff when he's scared. He has brown eyes, and brown triangle patches on his cheeks. The very tip of his tail is a salmon pink color. He has two big teeth in the front of his mouth, which are visible when he opens his mouth or smiles. He has large, cream colored claws on his feet, and cute, paw like hands.

Personality Chester is a young, quiet, and shy child. He loves to be in nature; in forests, near streams, rivers, and lakes. Nature calms him, and he loves to play with small animals. He hides from most people, and his only friends are Gyro the Hedgehog, Simone the Fox, and Basil the Skunk. He often plays with Basil in Simone's backyard, whenever he's not in the forest nearby. He often gets scared of the dark, so he sleeps at Simone's house, either in the backyard or in her room with her. His fear of cars came from him being hit by a car from behind, and he survived. He wasn't hurt at all, but it scared him a lot, making him want to avoid all large machines.

Chespin was once a starter Pokemon that wasn't chosen in the Kanto region. The Fennekin and Froakie were taken by two young boys, and he was left behind. Proffessor Sycamore took care of him, but he ran away into the forest to see if he could fit in somewhere. He was transported to Mobius when he found a Dream Stone, and wished to be taken somewhere else.

After coming to Mobius, he quickly got into trouble; being struck by a car the moment he arrived. He quickly ran to the forest, and hid for several days, eating berries and fruits. He eventually stumbled upon Gyro, and followed him to Simone's house, where he met her and Basil. He made friends with Basil after a while, but kept mistaking people for Pokemon. He finally figured out that he wasn't in the Kanto region, he adjusted a bit to Mobius life.

Chester has a normal set of Pokemon moves, being able to do what a Chespin can.

Thin vines come from his back, striking the person he wants to hit. He can also reach far away things with these whips, or use them to climb things.

His fur stands on end, becoming sharp like needles. The needles target the enemy, and hit them several times. He usually uses this to get fruit off trees.

He throws large, hard shelled seeds out of his pockets, aiming for a target. He can also use them to get fruit, or create a distraction.

Like Amy and her Piko-Piko hammer, he summons a wooden hammer to batter enemies with. He mainly uses it in serious situations, because it's hard for him to use it and aim.

Chester can stiffen his quills to protect himself, and has a hard shell on his back, like an armadillo. He can control almost anything in nature; controlling leaves and making trees bend. He usually uses this to hide.

He's weak against the elements of fire, bug, poison, ice, and air. He is also easy to scare, and flees easily. He cries whenever he's scared.

Retrieved from "https://sonicfanon.fandom.com/wiki/Chester_the_Chespin?oldid=1848721"
Community content is available under CC-BY-SA unless otherwise noted.