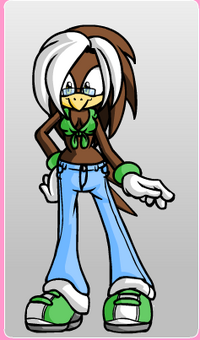 Cheryl was the only daughter who was born to the most prominent Eagleton family. This clan had come from a long line of eagles who wielded amazing aerokinetic abilities. Both of her parents were the chairmen of the board.

﻿Cheryl's curves are athletic, but as voluptuous as Rouge's. Her feathers are brown and her front bangs are white and chin-length. She has golden-yellow eyes and her beak matches the same color. She wears a green bra shirt, a pair of basic white gloves with green ring cuffs, light-blue boot-cut jeans and a pair of white and green sneakers. She also wears pince-nez eyeglasses.

﻿Cheryl is an intelligent, cool, cheerful, friendly young teenager. She loves her family and vows to protect them and her friends, including herself. Despite being pampered, she can spread her wings so she will travel many places as possible.

Cheryl is proficient at advanced combat skills and wields impressive, aerokinetic abilities inherited from her clan. She can run and fly at great speed. Aside from this, she is an accomplished cook.

﻿"I'm Cherilyn Eagleton. But you can call me Cheryl." -Introducing herself.

Behind Every Good Woman- Tracy Bonham.