Charmy Bee is an anthropomorphic honeybee, who is also from the canon series. He is the son of Elizabeth Bee, the older brother of Ellie Bee, and the nephew/godson of Jerome Bee. He works for the Chaotix Detective Agency as the tracker on Vector's branch. 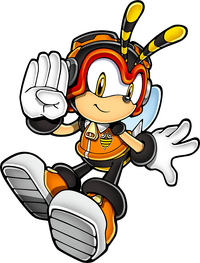 Short, Fuzzy, Black Hair (only seen when he takes his helmet off)

Orange Vest with a Gold Zipper and a bee-shaped patch

His Friends and Family

Any Hints that lead to his True Intelligence

Prince Edmund Bee of the Golden Hive Colony (known by most as "Charmy"), was the firstborn child of Queen Elizabeth Bee, and the King of the Golden Hive Colony. Two years later, he became the older brother of Princess Elise Bee. Elizabeth and her husband requested that Jerome, Elizabeth's younger brother, would be their godfather, in case something were to happen to them, and he agreed.

A few months after Elise was born, their was an attack on the Golden Hive Colony, forcing them to surrender, and the kingdom was destroyed. However, one of the servants was able to get the two children away from the remains, and bring them to Jerome, who then had been raising them since.

Charmy first appears in Chapter 1 of Sonic Fanfiction, sitting behind a sign-up table at a chili-dog-eating contest. When Sonic walks up to the sign-up table, Charmy greets him, and hands him a clipboard with a sign-up sheet on it, and a black pen. Sonic asks him if he should be in school, but Charmy informs him he was paid ten rings to skip school that day, and tells Sonic not to tell Vector or his uncle, Jerome.

Sonic fills out the sign-up sheet, and starts to walk over to the table where the contest takes place, but Charmy calls him, and tells him he forgot to pay five rings, the admittance fee. Sonic tells Charmy to let him in for free, and in return, Vector and Jerome would not know about his truancy. Charmy accuses Sonic of highway-robbery, but gives in after Sonic tells him that Vector and Jerome will be the first to hear about it.

The second part of Chapter 1 is taken from Charmy's point of view, and similarly to the first one, it is written in second-person narration. Charmy watches Sonic pull himself back up onto a stool, still laughing at Blaze's weight gain. He reflects that obesity is technically a disease, and that would almost be the same at laughing at someone who has cancer. He is tempted to kick Sonic in the back of the head for being so mean, but since Dylan was most likely close by, and although on a different branch, still a member of the Chaotix, also thinking about the connection they had with not only each other, but with the police as well. On top of that, he also thinks about since Jerome is a police officer, the consequences may be heavier than most, so he decides to just leave it alone.

He takes a note out of his backpack that he had recieved earlier that day on his way to school (via paper airplane), where "a friend" told him to skip school and meet them at Future City Park, shortly after the chili-dog eating contest, because they had a potential job for him. The note had come with a ten-ring-bill for further persuasion. Charmy assumes whoever the "friend" is, the writer is female, judging from the hearts at the border of the stationary, and the near-perfect cursive handwriting. He puts the note back in his backpack, and decides to fly around Future City Park, and look for the author of the note.

A couple minutes later, he had covered at least half the park, but no sign of the "friend" who sent him the note, and he wishes they had been a little more specific on a meeting place. His flying speed slows down and he drops to his hands and knees as an unknown object gets stuck at the back of his helmet. Charmy takes off his helmet to notice that it was another paper airplane, almost identical to the first one. The note had acknowledged his timeliness, and told him to meet up in the tree. After reading this, he puts on a falsely clueless face, and flies up into the trees, noting that the leaves and branches were thick, due to the early-summer weather.

Once he is up there, Rouge greets him, and greets him as if he were an old friend. She extends her hand out, most likely for a friendly handshake, but he takes a step back, and tells her that Jerome warned him about her, and that he shouldn't be talking with criminals. Rouge attempts to flatter him by calling him smart (to which he replies he wasn't and doesn't have a lot of common sense), and telling him he was right for thinking that way.

Charmy asked her what she wanted and why she called him here, and she tells him she figured boys don't like gossip, but apparently there was a rumor going around that they were harboring a Chaos Emerald.

Charmy then has a flashback when he and the other members of the Chaotix are in Dylan's office for a brief yet important meeting. After Dylan and Uno pull a small yet heavy safe out from a secret compartment under the floorboards, he asks what the safe was, pretending not to know what it is. Shortly after Espio explains to him it is a safe, he starts singing the word "safe" over and over again in an unplanned tune. He hears a tune blasting in the background, and assumes it is Vector trying to tune him out. Dylan tells Charmy to go sit by Epsio, and he complies. After Dylan tells them that the Chaotix had been hired to keep a Chaos Emerald safe, and he does not know how long they are keeping the emerald safe for, but he wanted the other branch of the Chaotix to know it was in the safe underneath the floorboards in his office. When he is finished talking, he asks Charmy and Espio if they understood what he said, and they nod. When Dylan asks Vector the same question, they find out he had been so busy trying to tune him out, he didn't understand anything that was going on at the moment.

The flashback ends, and he nervously asks her what made her think that the Chaotix were harboring a Chaos Emerald, and she casually tells him it was just a rumor, though it seemed her eyes were "scanning" him, "as if they were looking for any sign of weakness". He tells her she may have paid him ten rings for nothing, because they didn't have a Chaos Emerald. However, after some gradual exchanges in ten-ring-bills (and some arguing between "personas"), he tells her where it is (in the right part of a room, but in a false location), she pays him an extra fifty to retrieve it for her in three days, or she will find a way to get the Emerald, and the money back herself. After he agrees to the job, she flies off.

Charmy is sastisfied with the amount he recieves, and knows it will help the Chaotix, but then after some thought, he realizes he can't give it to them (or Jerome) because they will most likely come to the conclusion he stole it, whether it was "unintentional or not.". He decides since he has three days to figure it out, he would keep the money with him, and figure out what to do with it later. He then decides to head back to the Chaotix Detective Agency, being sure to take his time, figuring it is better to arrive back late than early.

Charmy is mentioned twice in the third part of Chapter 1, though not by name. The first time when Rouge is sure she made a good decision by giving him the task of retrieving the Chaos Emerald for her, and again when Rouge tells Carter that she had paid him to retrieve the Chaos Emerald, because he and his friends needed the money.

Charmy is mentioned twice in the first part of Chapter 3, when Jerome finds that Charmy is not with the Chaotix and presumably "wandering the streets alone". This engages in an argument between Vector and Jerome, which is soon broken up by Espio, who reminds them this is not the time to be unprofessional. He is mentioned throughout a mostly one-sided converstion between Vector and Espio, when Vector thinks Jerome might be too protective of Charmy.

Charmy appears again in the second part of Chapter 3, by now finding his way to the Hayes' mansion. He is seen talking with Jerome, but the subject of the conversation is unknown. When Vector comes up in spider webs, he teases Vector about being afraid of spiders in a sing-song voice. He is among those that laugh when they find out the chao that Espio found have imprinted on him. He pleads with Vector to let the Chaotix keep them, and Vector agrees, but only until they can locate the chaos' real mother.

There are certainly some noticable differences in Charmy's personality in this universe compared to his canon counterpart.

Though Charmy can run at high speeds on foot, he can reach even higher speeds when he flies.

He can use his stinging tail when angered or in battle.

Despite his small size, Charmy is unusally strong for his age, being able to lift things several times heavier than he is.

Although very few know about it, Charmy is very bright, and sometimes notices things before his teammates do when solving cases. He will sometimes discreetly leave a clue where his companions can find it.

Charmy's "Smarter Persona": "The money's no good. Probably stolen. Put it down, Charmy!"

Charmy: "But...the Chaotix...we really need the money. The power keeps going out...the plumbing's faulty...it won't be enough to fix all of it, but if we can just get her to give us a little more..."

Charmy's "Idiotic Persona": "Don't worry! It's A-okay! You're doing this for their sake, right?"

Rouge: "I'm sorry, what was that?" (Hands him another ten-ring-bill).

Charmy's "Idiotic Persona": "Say it! You have to!"

Charmy's "Idiotic Persona": "Instincts? What instincts? If ya got instincts, you don't got a lot of 'em!"

-An arguement between Charmy and his "personas" about telling Rouge where the Chaos Emerald is. (Sonic Fanfiction, Chapter 1)