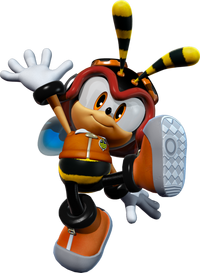 Sonic, that was SOOOOOO much fun! Can we do it again? Please? Please!? Pretty please!?

Charmy Bee is the youngest member of the Chaotix Detective Agency. He makes recurring appearances in BearfootTruck's stories. In all his appearances, he still holds the title of “Most Hyperactive Detective”

Not much is known about Charmy's early life. All that’s known is that he was a happy, carefree little boy who frolicked through the forests and fields of Mobius, not knowing about any mad doctors or their evil plots. Then, one day, he ran into Espio the Chameleon, Vector the Crocodile, Mighty the Armadillo and Ray the Flying Squirrel, and they became friends. One day, these four friends decided to go to a newly-built amusement park (Ray chickened out because he was afraid of rollercoasters). However, Charmy and the others were kidnapped, and they would've been roboticized were it not for a brave red Echidna. After the rescue, Charmy and the others formed the Chaotix Detective Agency.

Not much is known about Charmy's real parents. Initially, he lived in a foster home, but since his foster parents were abusive, he escaped and spent his time living in the wilderness east of San Santos. One day, he met with Espio the Chameleon, who was on a quest to find meaning to his life. Despite the differences in personality, the two found enough common ground that they became friends. Eventually, they met up with Vector the Crocodile, who had swam the oceans and ended up in San Santos. Vector, interested in solving the mysteries of the world, brokered a deal with Charmy and Espio, forming the Chaotix Detective Agency in the process.

Born to King Bee and Queen Bee on Angel Island, in the Golden Hive Colony, Charmy grew bored with colony life, and not feeling ready to take on royal responsibilities, he fled to the surface, where he spent much of his time frolicking about the Great Forest. When the Great War broke out and the Roseinian Armed Forces pushed their way into the Kingdom of Mobius, he eventually met with Espio the Chameleon and Vector the Crocodile, and the three formed the Chaotix as a mercenary group dedicated to taking on the Roseinians on their own terms.

Charmy is hyper, scatterbrained, immature and very chatty. In contrast to his teammates, he would rather play around than do serious work. Nevertheless, Charmy is a valuable asset to the team because of his friendliness, his optimistic attitude and his various abilities (see below). On the other hand, he seems rather impressionable, too.

Charmy's appearance is exactly the same as his canon counterpart.

Like all bees, Charmy can fly. And, like all bees, Charmy can sting (in real life, only female bees can sting). However, his venom is generally not fatal. Moreover, his insect senses make him an excellent tracker. Rumor has it that he can pollinate flowers and teleport between them, but there's not enough evidence to corroborate this. When he’s not doing investigative work, Charmy also plays drums.

Charmy uses no weapons other than his stinger. He owns a collection of game consoles including some Sega consoles.

In his usual, hyperactive mood, Charmy tries singing a few songs to Espio and Sally over the radio, including "John Jacob Jingleheimer Smith" and "Eggman Has Only Got One Ball". However, Vector takes the mic away from him and unplugs it.

Charmy – along with Espio and Vector – worked on a 1970 Chevy Camaro Z/28 for Sonic's birthday. He is super-excited to go for a ride and even more excited when he actually goes on the ride, so much so that he wants to do it again. When Rotor gives Sonic a self-cooking pancake pan, Charmy is excited for pancakes and is sad when he gets none at the party, so Vector agrees to take him to IHOP, much to his delight.

Once again, Charmy, Espio and Vector have gotten cars for somebody's birthday…Shadow and Rouge's, to be precise. Later, Charmy films the motocross race with his watch phone.

Charmy is attending the International Festival of Community as the drummer for Sonic and the Diesel Cats. He deduces right away that Hope is Shadow's girlfriend. Later, he is confused when the Palladium rumbles from the bomb explosion and is awed when Shadow hugs Sonic.

Much like Wir Sind Menschen, Charmy is the drummer for Sonic and the Diesel Cats, first seen playing a show at a local bar & grill in San Santos. Next, he plays a show at a local high school, meeting Silver and Blaze in the process. Two days later, he plays the Monsters of Rock festival, where a local music promoter offers him and the rest of the band a chance to play at the Maplewood Bowl, much to his surprise. The next day, Sonic invites him to a barbecue at Rouge's mansion, where he gives a little demonstration of his drumming skills. He also wows everyone except Shadow during the show in the mansion's drawing room. The day after, he plays the show at the Maplewood Bowl and gets a hug from Rouge for calling her "pretty". Two days later, he plays a show at the Imblewood Forum and gets another surprise as an A&R executive from a big record label wants to sign the band to a record deal.

Charmy is sent out on a grocery run with Espio. Initially, the little bee is reluctant to go, but when the Purple Phantom promises him his favorite ice cream if he behaves himself, he agrees to it. He behaves for the most part, but bursts out into uncontrollable laughter when he sees beef jerky. He does, however, manage to get his ice cream.