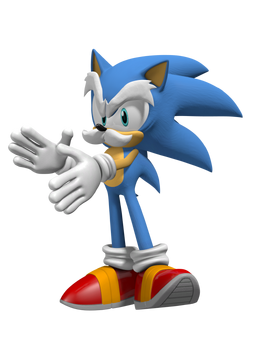 Sir Charles the Hedgehog, often called Uncle Chuck, is a character that appears in the Marshalia13 Universe. He is a mobian hedgehog, a brilliant inventor in service to the Kingdom of Acorn on Westside Island and the uncle of the world hero, Sonic the Hedgehog. Charles is a well known genius who has always used his research and inventions for the good of the world.

Charles is a mobian middle-aged hedgehog who bares many physical similarities to Sonic, such as blue fur (although Chuck's is a few shades lighter than Sonic's). He has a thick, grey mustache that obscures his mouth, as well as similarly thick, grey eyebrows, arching over his blue eyes. For attire, Charles wears maroon colored, slightly pointed shoes with two dark yellow straps and and white cuffs, and, like most other of his species, white gloves.

Though not much about his early life is known, Chuck began as a trusted ally and to King Nigel Acorn and the Kingdom of Acorn. Chuck made many attempts to build an invention named the Roboticizer but with little success, much to the disappointment of his friend, Dr. Ellidy. Soon, he and Rosie Woodchuck found a young Bunnie Rabbot, and Marsha later on, in the abandoned in the Royal Hills Zone and took her into the kingdom. Later on, a man named Dr. Eggman came to offer his services to the kingdom in defense against a "planned" invasion from the United Federation. It turned out that Eggman had deceived the King and banished him to the Special Zone while also taking and modifying Chuck's Roboticizer to make enforcer robots named Badniks. Chuck was forced to evacuate the kingdom along with its other inhabitants to Knothole. There, he had to use his version of the Roboticizer to save the life of Bunnie after she was gravely injured during Eggman's takeover of Mobotropolis. He would later use the Roboticizer to save the life of his brother.

An intellectual individual, Charles cares for his loved ones more than he does himself and is typically somewhat quiet, though outspoken when it comes to opposing what he believes to be wrong. However, he is quick to be hard on himself for his mistakes, often to a point far beyond what he should lay on his shoulders even when it's not his fault in the first place. Always willing to provide advice to Sonic and the Freedom Fighters, he shares a close relationship with the young heroes. Bound by a high sense of duty, he is willing to put himself on the line if it means helping others.

Retrieved from "https://sonicfanon.fandom.com/wiki/Charles_the_Hedgehog_(Marshalia13%27s_Universe)?oldid=1786166"
Community content is available under CC-BY-SA unless otherwise noted.