Start a Wiki
This is an article about Chaos Shuriken, a character created by Horus-Trickster-King on 01/25/2015.
Chaos Shuriken 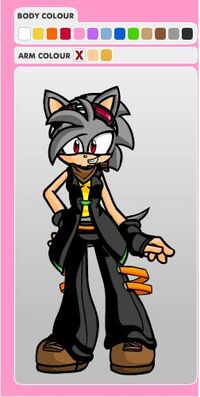 Chaos is very reckless and impatient, often rushing off to do things when she is told they need to be done.  According to her father, however, at a younger age, Chaos was a little bit less rash.  When told this, Alex remarked "It's hard to imagine Chaos as being less rash.", so it would seem that Chaos grew out of this calmer temperment quickly.  However, Chaos can also be very cold, suiting her cryokineisis.

Chaos was born in Icehaven, a small town in northern Mobius.  As a young child, she was instructed by her father on how to control her rapidly developing cryokineisis, and as such, soon became a deadly user of ice.  However, at the age of thirteen, Chaos apparently experienced some kind of personality change, as she became rasher and less inclined to think things through. When she turned sixteen, she somehow came into possession of the red Chaos Emerald.

Chaos possesses cryokineisis, or control over ice and snow.  She appears to have inherited this power from her father, as she is the oldest.

Chaos, suiting her nickname, has a high degree of Chaos Energy manipulation.  Apparently, she already had innate Chaos powers, but her finding a Chaos Emerald seems to have boosted them to a supernatural degree. Chaos powers and forms initiated by a Chaos Emerald available to her are:

Frozen Chaos is an alternate form of Chaos that is activated by using a Chaos Emerald at the same time as ice abilities on Chaos.  As Frozen Chaos, Chaos gains complete control over ice, and seems to be able to fire off Chaos Blasts at will.

Chaos can apparently sense when Ignis or Cobalt is nearby, thereby giving her an advantage at tracking.

Chaos is a master of hand-to-hand combat, and Alex frequently jokes that "I'm afraid that Chaos might have to register herself as a lethal weapon before long.".Chaos also is good with a gun, but she normally keeps her talents to using a handgun.

Chaos hates Ignis with every fiber of her being, and as such, cannot resist making cruel jokes when she loses.

Retrieved from "https://sonicfanon.fandom.com/wiki/Chaos_Shuriken?oldid=1853012"
Community content is available under CC-BY-SA unless otherwise noted.