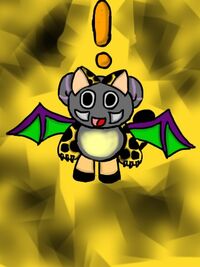 Champ is a Chao found and raised by Twilight the Lycalo.

Champ was born in a Chao garden like most of his kind. His former owner learned of the unique two-toned colored Chao which sparked some curiosity. After many tries and failures, Champ was finally born. The owner was pleased with this and raised the newborn to become his champion. Champ's stats skyrocketed and his skills only increased after entering numerous fights and races. Unfortunately, as he reached the age of 4, his owner had placed all attention on more new members of the garden. When things became too crowded, Champ was one of unlucky few to leave the garden. He was sent to a faraway forest to live on his own with nothing more then a sack on the end of a stick. He survived with no problems, but being separated from his owner tore away at his heart. Being so glum at such an old age would mean the end for Champ and he was unaware of this.

Becoming lost on one of his flights, a sky blue wolfbat found the tiny creature and was instantly attached to it. Doing the right thing at first, Twilight sought after his owner or anyone who would claim him, but simply decided to make Champ his own 2 weeks after. The Chao had found happiness with the Lycalo and the timing couldn't be any more perfect. Another 3 weeks with the Lycalo passed and Champ had reached his 5th year, the end of his life cycle. Thanks to Twilight's love and compassion, he was able to reincarnate after his death. Being confined within an egg for a short time, he hatched and was an infant once more. He continues living a happy life with the hybrid and is most grateful he was found.

His appearance loosely changes depending on his age, in which he will grow a year older every 72 days. Throughout his incarnations, his appearance will remain the same.

Age 0 - Child: Champ is still within his egg, which looks to be a normal colored Chao egg. He will naturally hatch after 5 days. This process can be interrupted at any time with a small amount of force, although this results in an upset and disoriented Champ. Once he does so, he, like most Chao, has a large head, a round bubbly body with short arms with digit-less hands, short legs with shoe-like feet and a small, round tail. His eyes are large and oval with black pupils and a thin white sclera. A yellow colored emotion ball floats above his head that changes appearance corresponding to his emotions. Given his unique coloration, his body is gray colored with a round portion on his stomach dark blue. His hands and the frontal half of his feet are dark yellow. Since his stats are determined through the physical exercise he exhorts and Twilight takes him on his frequent flights, Champ is leaning towards the Fly type. As such, 2 half dark blue, short and arched spikes protrude from the back sides of its head, looking somewhat like a jester hat. His wings are small with orange bases and the other portion being yellow.

Age 1 - Adult 1st evolution: Once Champ reaches the 1st year of his life; he is surrounded by a light blue cocoon that's shaped like a Chao head. Once he emerges from this moments later, he enters the Adult stage. His size is noticeably larger with his head spikes being far longer. 2 stripes are seen looping along each of them with blue tips. The stripes closest to his head are pink while the remaining 2 are purple. Stripes of the same color and position are seen on each arm. His hands become dark blue and the round portion of his stomach turns dark yellow. A round portion of his back turns cyan.  His tail becomes thin and medium length with 3 dark blue stripes on it, one of which ending at the tip. His wings become large with cyan inner halves and green outer halves. These wings flare out to the side at 6 sections with 3 on each side and each flare tappers off at a curve. The uppermost one is the longest and each one below is longer than the next. Finally , his emotion ball changes into a tangerine color.

Age 3 - Adult 2nd evolution: This stage doesn't happen with a cocoon, rather a gradual transformation. Since Champ both runs and flies, he'll ultimately become a Fly/Fly+Run Chao. As such, only changes are that he grows slightly larger and his jesters curl backwards. The 2 colors of his wings appear to blend together to an extent and the curved edges become broader. His emotion ball also turns a golden orange color.

Age 5 - Death: Once Champ reaches his 5th year; it's the end of his life cycle. If he has enjoyed life, he will be shrouded in a pink cocoon and reincarnate, starting his cycle from the beginning once more with all memories passed down from previous incarnation. However, if he is unhappy, a white cocoon will surround him. No egg is left over from this and Champ is unfortunately gone forever and has died permanently.

Champ has extraordinary skills in flying much like Twilight and can even fly for longer periods of time than the Lycalo, but isn't as fast. His speed and endurance on the ground is just as impressive. Twilight has additionally taught him how to swim somewhat well. Due to taking a number of lessons in school, he has become proficient in playing drums, drawing and dancing. Champ seems to have great intelligence. While he's limited to gibberish, baby like sounds, he can understand speech with no difficulties. Champ possesses a sixth sense of sorts that allows him to determine hidden danger or people's true intentions if they are malevolent. Given his oblivious disposition, it usually takes some for this to even be effective.

Throughout his life in the Chao Garden, Champ has come across a variety of animals, although these were removed shortly after his reincarnation with the uncanny power of the Skeleton Dog purchased by Twilight. As such, he has developed various behaviors. He can be seen rolling around, flapping his wings, beating his chest, preforming forward somersaults and bucking his feet. These parts have additionally caused him to learned how to preform a backstroke while swimming.

Due to Champ's overexposure to the Phoenix and Dragon animals, he has been granted the control of fire. Although he doesn't even know this power exists and it only shows itself in two instances. Whenever Champ sneezes, there's a good chance he'll emit a stream of fire from his mouth that reaches a good range and causes moderate burns. Also, if enraged or frightened enough, his entire body will be shrouded in deadly fire that lasts until he's calmed himself. What the most uncanny ability this power holds is Champ's ability to bestow Pyrokinesis to those he's bonded with so long as they're within very close proximity. Only one individual has formed such a bond with him and a few others are almost at this stage as well.

An ability discovered some time after the fire granting power. The bond between Champ and Twilight has increased to the point the two are able to speak with each other telepathically by allowing his Chao language to be translated for Twilight. Of course since it is rather new, they have yet to utilize it to its full potential which often leads to miscommunication.

Bestowing Twilight the two aforementioned abilities are not the only extents of the bond Champ and the Lycalo share. If Twilight were to undergo his transformation while Champ is within close proximity, the Chao will transform into a different being as well. This is the result of Twilight essentially sharing his curse with his little buddy as the Dark Magic he is composed of infects Champ at this moment. This transformation is visible by Champ being enveloped a dark purple cocoon with an identical shape as the others, only there a horn-like protrusions on the top. After a few moments, the malevolent Death is unleashed and ready to cause mayhem and destruction.

Champ is a small and frail creature who can take little damage. His power stat is at near nothing as well and his attacks don't have much strength in them. Furthermore, he is terrified when it comes to hostility. Champ is no fighter and will always flee when a threat is near. Although he will rarely face the problem head on, so this aspect is somewhat debatable. He also seems to trusting of strangers which can put him in a troubled situation if he's too careless.

Champ is a curious creature and frequently wanders off by himself, much to the mild annoyance of Twilight. He absolutely enjoys meeting others and is smart enough to be cautious around strangers. It takes little for Champ to trust someone and once he does, his hyperactive demeanor is almost instantly shown. He loves nothing more than making others laugh or smile and he goes to rather silly extents to do so

Retrieved from "https://sonicfanon.fandom.com/wiki/Champ_the_Chao?oldid=1799666"
Community content is available under CC-BY-SA unless otherwise noted.