Cesar the Hedgehog (セザールヘッジホッグ Sezāru za hejjihoggu) is a dark blue hedgehog anthropomorphic that has mysterious elemental powers. He practices light, fire, water, forest, thunder, earth and air powers thanks to the Cemayas. But he yet doesn't master tham all; except his fire powers). He is a 15 year old teenage hedgehog that has a destiny waiting for him. His destiny is becoming the Universe's new savior: according to some Cemayan prophecies and mythologies. Cesar also has 2 weapons that the Cemayas gave him: one is a sword that can also work with elemental powers and a mystic powered Cemayan stone.

It all started in Mobius. The planet and home of the mobians. Where they were beautiful environments and nice places. In a place called Mission Valley, known as Mission Valley Zone, there was a green hedgehog with unknown parents named Cesar. A smart hedgehog that was pretty smart and had great studies and he got a job as a drug chemical biologist. Cesar one day met a women purple hedgehog named Gabriella. A women hedgehog that didn't finished college but she works as an administrator at a hostipal. They both met each other and became a couple; and as time passed by, Cesar asked Gabriella to marry him. And, as you can be surprised, she said yes.

Months happened and Cesar and Gabriella married in winter. 2 years later, Cesar and Gabriella had a very great time being husband and wife. In that time, Gabriella was pregmant and they both didn't have a home for their own so Gabriella asked one of her sisters to gave them a rent to live over there; but only when it would be the time that her baby was born. Some hours later, Gabriella had a baby girl named Nathaly. A girl hedgehog. 3 years later passed by and Gabriella was, you guess it; pregmant. Only this time they got a new house for their own along with Nathaly. But they got 1 month before the new baby came. So Gabriella was drived to the hospital and Cesar, with her daughter came too. Hours later, Cesar the Hedgehog was born. A baby boy hedgehog with aqua fur and 10 quills.

Almost 15 years has passed and Cesar was a teenage hedgehog. His fur has been changed to navy blue due to his ages. He had bangs on his forehead (emo-like hair) and, still, 10 quills. He doesn't wear any clothes that humans use. He wore crimson red gloves and black shoes. He also got a gray ribbon on his left arm: because he got an accident a few years ago when he was walking around something dangerous.

So Cesar was walking after school and somehow, a mysterious multi-colored clear stone appeared falling from the sky. The stone hit Cesar and he decided to keep it to see what it is. He arrived from home and he closed his room's door to take a peek on the mysterious stone. When he was looking close to it, the stone shone and introduced an hologram from a weird human-like creature called a Cemaya; warning that the person who took the multi-colored stone, he will be the hero and the only hope to save the universe from an unknown galaxy-size creature. Cesar was surprised and he thought it was just an illusion. So he decided to look at the message once more. Cesar then went with her girlfriend Sara the Wolf. Sara was Cesar's firtest girlfriend and she is very special for Cesar. Same with Cesar that he is very special to her.

So while they both have a romantic time together, Cesar talks about something weird that happened in his room; about a prophecy of a chosen hero to save the universe. Sara was interested in hearing of that certain event and in the middle of their moment, a creature gets teleported to where Cesar and Sara are; and that creature is known to be a Cemaya. A Cemaya is an elemental warrior that comes from a different galaxy. They have the exact look of a human; but the difference is that they are born by natural elements and also mixed elements. The Cemaya that just arrived was a fire kind. His name was Fire Cemaya.

He questioned to Cesar if he was the chosen one and about the mystical Cemayan stone. So Cesar questions what he was and why is he the chosen one? Cesar was chosen to that because his attitude, his knowledge, and his heart and force will make him the one to fight the negative creature. But he needed the help of 7 main warriors to help him out through his adventures.

So Cesar makes a deal and he is officially the chosen one; and after that, the Fire Cemaya rewarded him with a replica of their Sacred Cemayan pendant. So later Cesar was told to find the other 6 main Cemayas so he can gather them to save the universe from the negative creature named Chroxgamma. Sara joins the party and Cesar and her go through an adventure. If you wonder what will happen to his family, his family somehow got kidnapped by dark forces that landed of the planet. The dark forces come from Chroxgamma and the whole universe is in danger. Cesar must go through every zone to find the other 6 main Cemayas; thus our adventure begins...

One day in a summer afternoon, the creator of Cesar the Hedgehog, had a character before this hedgehog. Since he was a Sonic fan, he decided to make a dark blue hedgehog with bangs and black shoes named Cesar the Hedgehog

Cesar (the creator) was one day hearing about a new Sonic downloadable game called Sonic 4. He later investigated about this game around the Internet. Later he became a Sonic the Hedgehog fan and in August 2010, he was a great fan of the Sonic franchise. Until he somehow hatched the idea to fuse his own character Cesar with the fastest thing alive Sonic. The result was an aqua blue hedgehog with bangs.

Since he is the chosen one to the Cemayas, he uses the power of Fire Cemaya to produce fire and attack with it. Also he uses it to help people sometimes.

He uses Water Cemaya's power to control the ocean, water, liquids and to generate water. He also uses it for emergencies and economy helping

This power is taken from Forest Cemaya. He can control plants and produce them. Not to mention that he can attack with leaves.

This power is taken from Thunder Cemaya. With this, Cesar can make thunder storms, electrocuit things and generate energy.

Taken from Stone Cemaya (Earth Cemaya). Cesar can throw rocks and many, attack with the ground and many things.

It allows him to float in a short period of time and to create wind.

This power is taken from the Cemayas leader Light Cemaya. This is a very important power. This ability can make him light up everything, revive, and a mysterious power is hidden under it.

Cesar goes Super Cesar and uses the 7 Cemayas to create this move. This attack creates a massive energy that can destroy a god like creature.

Well according to several problem that happened in a different dimension, Cesar can also transform into a human.

Sara the Wolf is Cesar's girlfriend. Cesar's relationship with Sara is romantic and sweet. Cesar first met Sara at a friend's house and they meet the love at first sight...

"I'm Cesar the Hedgehog, the chosen one"

"Ooh Yeah. This is Awesomely EPIC!" (When Cesar gets an S-Rank)

"Ooooh Yeah!" (When getting an A-Rank)

"That was fantastic!" (When getting B-Rank)

"It's good enough for me" (When getting a C-Rank)

"Let's do this....For the UNIVERSE!" (When Super Cesar is about to battle Chroxgamma)

"Look at my aid. Stupid Motobug"

"Hmmm.....i wonder what happens if i gather all 7 Chaos Emeralds and have another transformation?"

"Human Me" (When he reencounters his human self)

"All right Metal Cesar. Prepare to meet the brawling hedgehog"

"The more power I gain from the Cemayan Masters, the more I power up to save the Universe." 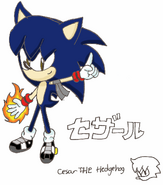 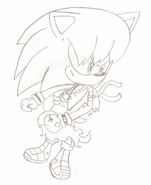 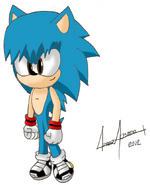 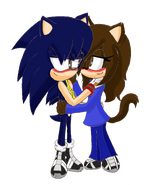 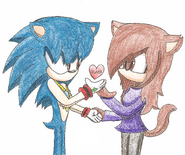 Cesar and his girlfriend holding a heart.
Add a photo to this gallery

Retrieved from "https://sonicfanon.fandom.com/wiki/Cesar_the_Hedgehog?oldid=1750986"
Community content is available under CC-BY-SA unless otherwise noted.