Voted Most Beautiful Female for Spring 2013!
This is an article about Cerys the Caraval, a character created by SPop120 on 04/17/2013.
Cerys 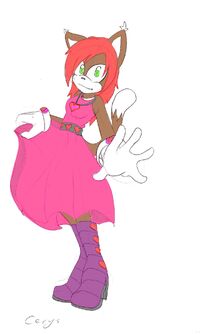 Cerys has light tan and a subtle red in her fur, and pink hair, which has four strands that curl inwards and separate from three other strands that curve outwards.She has light spots that can only be seen closely. She has a  Her ears are light tan, with black tufts of fur on the top of them. She has a light, short lengthed muzzle with a red heart shape on the cheek. She also has fangs when she opens her mouth, and sometimes when she closes her mouth, a fang will stick out like a snaggletooth.

Cerys wears a light pink dress, with a light red belt with a pink heart on the side. She wears white gloves with a heart around the part that begins on the wrist. She wears light short pink boots with straps that have a red heart on each of them.

Cerys will occasionally dress in a pink-red sweatshirt with polka dots on it. She will wear her hair in a ponytail, and will wear bone-patterned leggings, along with pink flats.

This super form is triggered by her going into someone's dreams. This is the form of how she will appear in someone's dream. She will be a clear, white, and is transparent. She will have a faint pink glow, and a rose-colored tint to her. She will appear the same when she comes out of a dream, and before going back into her body. She cannot stay in this form for long outside of a dream. She will hover a bit. This form is for the purpose of going into dreams only; however, she can battle in it, but she cannot stay too long outside her body when she's not in a dream, or stay in that form forever.

Cerys is very shy. She is depressed, a hopeless romantic, honest, and caring.She often tries to hide herself, her past, and her personality. She is honest, just not brutally honest. She will still play hard to get, or pretend to be oblivious, because she doesn't know how to trust people well. She is often afraid of being hurt. In her personality she is as well polite, and civilized, but also secretive, and keeps secrets hidden within her and her feelings all bottled up. In her true personality, if she holds any romantic feelings for someone, she will try to avoid them, but knowing she cannot, will have the tendency to try to get close to them, avoiding them the next day, realizing her fear of getting hurt or someone close to her dying. She is afraid of losing people close to her. If she feels she trusts someone, her true personality shall be revealed. She often plays hard to get when guys show romantic feelings for her. In her personality, she will try to push someone she has romantic feelings for away, in fear of getting hurt.

When Cerys was young, she had everything that she'd ever dreamed of. She is part of a wealthy vampire clan, but she inherited no vampire characteristics from her father and mother. She had a large home, a sister, and a loving but strict family. She grew up to be polite and civilized. She was very close to her sister, Luiba, and would enjoy reading her stories, and sewing and making gifts for her young sister, which she loved.

Cerys eventually fell in love with a man. They dated for some time, and in a rage, killed Luiba, and almost killing Cerys, leaving her for dead. Cerys survived, and developed a mask personality so she wouldn't have anyone close to her for her to be hurt, or them dying, or them getting harmed in any way.

Cerys can manipulate lunar energy, in any shape and form. She can affect the tide, when at the beach or any source of water that has a tide manipulated by the moon. She can also change the color of lunar energy, as well as creating balls of lunar energy while in a fight. She can only use this power at night. This is a learned power.

Cerys can make plants grow, as well as manipulate their movements. She learned this when she was young. She hasn't had much training with this power, and so she is very inexperienced.

Cerys can create balls of light in any shape and color. She can send them anywhere, often blinding the target, but she can only do this in day, since she hasn't had much practice with this power. This is a learned power, and she learned it from Lucinda the Angelfox.

This is the power where she can go into someone's dream. She will inside the dream appear in her "Sweet Dreams" form, and she will appear the same way outside of the dream, before going back into her body. This takes a lot of energy, and she actually leaves her body. She cannot do this awake, she has to be asleep, but if she does do it awake, she will become unconcious, leave her body, and go into the dreaming person's mind. She can be a large distance away, but she will have to travel farther in her dream form. She cannot stay too long outside her body when not in a dream. This is an inherited power.

Cerys can very fast, up to 60 mph at the most. She however, does not have very good stamina and gets tired very easily. With her running, she tries to get faster and faster when she practices, and often succeeds in doing so, but is not the fastest character. She is also a speed-type character. She can also jump very high, up to 30 feet in the air while running, or anywhere.

She is weak when she is hurt when she least expects it, and becomes vulnerable when she shows someone her true feelings and personality, and if they end up hurting her or rejecting her real personality, she becomes very upset and vulnerable for a long time. Cerys also gets tired easily when running. Cerys also cannot stay in her dream form for too long outside a dream, as her body will literally die if she stays out of her body for longer than 10 minutes, and she grows very tired when she enters her body, as it takes a lot of energy, and she will then faint after renetering her body. She is also not the most durable person.

Allies/Friends (info to be added soon!):

Auburn and Cerys have a complicated relationship. Auburn always seems to think that Cerys' intereactions with a male are romantic, and will always try to set the two up. It makes Cerys feel extremely uncomfortable, and Cerys often does not know how to respond to Auburn's odd behavior.

Cerys and Luce are very close friends, as Luce guides her through many situations, and helps her. Cerys is also very thankful she has someone to talk to, and spend time with.

Burg's flirting towards Cerys can annoy Cerys greatly. Cerys never shows her annoyance, instead showing it as uncomfortableness or awkwardness in her behavior. Burg's flirting can also bother her a bit, often reminding her of her previous relationship with Quill, bothering her greatly.

Cerys used to love Quill, up until the point he killed her sister, Luiba, and almost killed her, leaving her for dead. Cerys has forgiven him, but remains bitter towards him, and will not talk to him in a very respectful tone.Cerys also wishes Quill would leve her alone, but he doesn't constantly bothering her, trying to get her to come back and love him again, but Cerys never will again. Cerys remains regretful for ever loving him, and will for the rest of her life.

Cerys considers Marik to be a special Mobian. Cerys holds romantic feelings towards Marik, and would do anything for him. She loves him dearly, and has full acceptance towards him being a vampire. She couldn't be more happy when she's with Marik, and will love him for all time. Cerys loves him with all her heart, and will forever be faithful to him. She is currently engaged to be married with him.

Cerys drawn by Kiramazing (Thank you so much, I love it :D ) 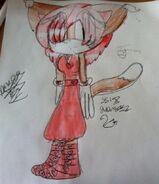 Cerys and Marik ❤ Drawn by CrymsonShokwave

Cerys drawn by 1feellikeamonster on deviantArt. :)

Sprite Cerys by Sarahhedgehog10 on Deviantart

Cerys in her casual outfit by 1feellikeamonster ov deviantArt. :)
Add a photo to this gallery

Retrieved from "https://sonicfanon.fandom.com/wiki/Cerys_the_Caraval?oldid=1844920"
Community content is available under CC-BY-SA unless otherwise noted.