This is an article about Cerise Poupeé, a character created by N8DASPAGR8IOZ on 02/25/2015. 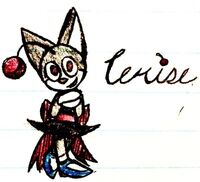 Cerise wears a black dress and skinny shorts with a red ribbon across her waist that is tied in a large bow on her back and has plastic sky blue slippers. Her body is primarily made of fabric and her eyes are plastic screens. Her pupils are usually black with a red glimmer, but she can change the color of her eyes to red pupils with black sclera. Her ears are flat triangles with white on the front and gray on the back. Her gem is completely spherical, and is connected to a thin wire of metal in the center of her forehead. Her "hands" are white fabric mittens; her body is gray, save for her white muzzle, and her nose is tangerine and plastic.

She is generally cool and somewhat sassy, and other times mischievous, and likes to mess with her friends by creeping them out or annoying them, but she is very defensive of those she cares for. She is oblivious to authority and impolite, making a lot of people uneasy around her. Oddly enough, she is willing to help anyone for any side for no reason, just because she feels like it. She seldom cares about anyone except for Takara, but she still has plenty of room on her whitelist. Her empathy is extremely delayed, and as a result it causes her to feel incredibly guilty and sorry for things she had just found out she's broken, but she continues to learn how to feel for others from Takara and Angel.

August 3, 2022, GUN was trying to pacify a vicious battle between Takara and Tails Doll. Meanwhile, in France, scientists had finally been able to successfully replicate a Mejori gem. Fashioned in the shape of a ball, the gem would be used to end the fight. The gem was soon stolen by some students, who wanted to use the gem to make a doll that will be their tool of world domination. When they hooked the gem up to the doll (they've already dubbed the gem "Cerise"), it transformed into its Neo form, Ceraigre (sher-ay-ger). She attacked the students, killing all but one, who ran away but was immediately arrested by the police. Ceraigre followed the car that held him, immobilized it and attacked the SWAT there, while the student escaped. After killing them all, she will continue her rampage across Centre.

In the midst of her chaos, she got distracted by fleeing boats and detoured to the North Atlantic Ocean until she reached Canada. While she fought the Canadian Forces Reserves, she noticed Takara and Neo Tails Doll fighting, and quickly flew hundreds of miles to join in. During the battle, Takara temporarily allied with Neo Tails Doll to subdue her, but Takara and Ceraigre accidentally crash into a civilian home and set it on fire, however both dolls were too distracted to notice. Eventually, Ceraigre exhausted her form and reverted back to Cerise and lost consciousness. Takara saved her from falling into fire and recharged her with his own spiritual power, reviving her. She didn't care about Tails Doll going back to destroy the planet again, but she decided to help Takara since he had helped her.

After eight years have passed, Takara has moved in with the Polyweather pack. Cerise finds him a few days later and decides to live in the house as well, until she is discovered by Axio. She begins to watch the house, making Dani and Axio uncomfortable. When they suggest kicking Takara out, Cerise realizes the potential further damage she'll cause, she offers to stay away instead, but Dani rejects. Axio then convinces him to accept her offer, and Cerise leaves.

Cerise was once again wandering about until she came across a quartet of Egg Knights and Eggman's scoutbot headed towards the Polyweather apartment. They try to attack her, but she quickly destroys them with her powers. Eggman notices this and asks Cerise if she came from a different zone. She bluntly tells him she's from France and asks him if he's looking for someone. The two exchange in a tense conversation (at least for Eggman) until he decides that she's wasting his time and detonates all of the robots. She flies in the opposite direction of whence the robots came and discovers one of his agents' bases. She invades the base unnoticed to live there, but stumbles across the occupant agent. While he tries to fight her, she reads his mind and discovers the coordinates to Eggman's current base, and after calling agent's base lame, she sets off.

Not unlike many other Mejori, Cerise can capture sapient souls and store them within her spiritual reservoir to use them for power, or she can use chaos energy instead. Although she lacks an actual endoskeleton, her supernatural strength allows her to break through metals as hard as steel or titanium. She can regenerate her body parts as long as her gem is electronically connected to the doll. Since her consciousness is in the gem, she can control anything her gem is linked to. Cerise typically attacks with just her brute strength or chain reacting explosions she calls "Cherry Bombs". Though she relies mostly on soul power for her attacks, she still uses chaos for teleporting.

Being made out of fabric, she is extremely flammable would lose her body if she isn't extinguished quickly. Her gem is a weak spot and if destroyed, it would end her. Her gem also controls her personality, and if chipped can cause damage to her psychologically. She isn't very fast either, and if you snap her wire, she would lose control to her body. She isn't very good at focusing and her lack of care for others gets in her way and makes her untrustworthy of projectile weaponry. Moths are a threat too, since they would eat her fabric. To counter this, she uses mothballs.

Sour Form (Enhanced Base form. Requires one hundred souls the first time, and fifty the next. After effects include weakness and varying degrees of withdrawal.) 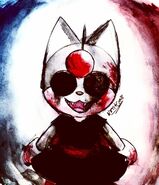 Cerise as a Mobian 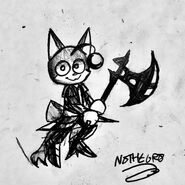 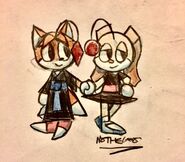 Takara and Cerise dress up for Halloween
Add a photo to this gallery
Retrieved from "https://sonicfanon.fandom.com/wiki/Cerise_Poupe%C3%A9?oldid=1854394"
Community content is available under CC-BY-SA unless otherwise noted.