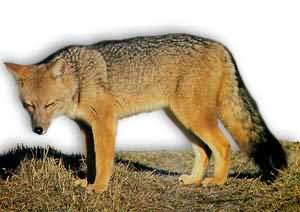 These characters are of the Culpeo species.

The culpeo (Lycalopex culpaeus), sometimes known as the zorro culpeo or Andean fox (wolf), is a South American species of fox. It is the second largest native canid on the continent, after the maned wolf. In its appearance it bears many similarities to the widely recognized red fox. It has grey and reddish fur, a white chin, reddish legs, and a stripe on its back that may be barely visible.