Start a Wiki
This is an article about Cassie the rabbit, a character created by Cyclonestar on 06/29/2013.

You must have bats inside your head,Wolfie!

Cassie the rabbit is one of the last rabbits.Her parents went missing and she is currently a member of the wolf pack.Some say she doesn't belong in the pack because she is a rabbit and is concidered by others to be the odd one out.Some say she's a chatterbox and blabbers on and on.She also has a heart for Harri. 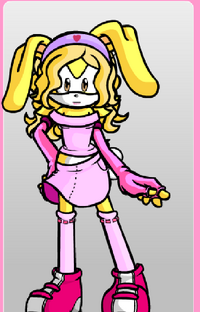 Cassie is always complaining to Knight about everything he does wrong.Her personality would be a little annoying but she is sane.Cassie is a little adventerous and avoids people who creep her out.She has a serious aditude and won't let anything get in her way.She may be twelve but she acts like she's 15.

In master School she was less aggressive and more of a nuiscence.

Cassie the rabbit was one of the last rabbits out of the ones that went missing.Her parents went missing so she had to work alone and get her own food.She met Knight with a bad first impression.She thought he was a "bad wolf" and started avoiding him.She did fantastic and had awesome adventures. Eventually she found a mountain and went into a small hut.At first she was surprised at the other wolves she saw but she got over it.She told them about Knight and they promised to keep him away from her.The promise was eventually broke when Knight used the other wolves to form wolf pack.She saw a wolf and was unaware that she was a member of the Wolf pack.She asked her to followed her and she did.When she discovered the wolf was a member of wolf pack the wolf trapped her.She went to a cave with glowing water.She threw her to the floor when she saw Knight.Knight explained he was protecting her by keeping her away from places the rabbits have gone missing.Cassie thought she was being held prisnor walking with wolf pack but once her and Knight became friends by some miracle she forgot about it.Cassie then learnt the way of the wolf and felt like a true member of the wolf pack.

The first ever game Cassie has appeared in is Sonic Chronicles:Secrets galore as a character Sonic's team meet along the way.She can help with crawling under small places(As well as Cream) and she can do the minigames you must do to continue the storyline or unlock bonus items you might need later on.She is very helpful and is one of the main characters.

Cassie stars in Cyclone the hedgehog as an allie to Cyclone and she also appears a few times to give optional missions.She is also in the last scene with all other allies.

Cassie was in Becky generations as a trophy,sticker,unlockable player and made a cameo appearance at the start when Monica and Cyclone were at the beach she was seen in the background playing frisbee with someone. It isn't shown who she is playing frisbee with though(It might be Knight).She ten appears in the mission challenges with a VS and a mission where she helps you.In VS you have to do a dance off as classic Becky copying Cassie's moves and adding your own until she gets it wrong.In the mission she helps you in she kicks walls when there's a dead end to reach further.She also appears in the final boss fight but unfortunatly she doesn't have a shot at attacking Batty Superior like a lot of other characters.

Cassie is unlockable in Mariala Party.

Cassie stars in Roleplay:Summer Camp in chapter 2.She first appears asking to play 21 when she sees Malakai the meerkat headed somewhere and she followed him to see Shimmer the Hedgehog asking to help spy on Malakai.Cassie introduced herself and Shimmer introduced himself as they shook hands.Malakai caught the two but invited them to play multiplayer.

There is a definate confirm she will appear in the role play High School Never Ends.

Other appearances in other media

Cassie's first appearance was on WOLF PACK where she was the main girl.Assisting Knight and becoming his best friend starting from hating each other.

Cassie also appears in Sonic X season 5 as a main character.She first appeared in episode 175 as a cameo and appeared again 7 episodes later.

Cassie knows chaos control.She says it's not so hard to get two chaos emeralds and yell "Chaos Control!"

Cassie cannot be defeated phisically looking at her moves.She rules at kicks,punches,hits and basically anything that involves attack.She is also a trained ballerina which helps her in combat by being much more flexible than others and uses her ballet skills to dodge her opponent's attacks and strike her attacks.

Cassie has no powers and is a bunny not a wolf.This is a disadvantage sometimes that makes her weaker than a few members of the wolf pack.

Cassie the rabbit has no transformations but she has outfits for certain missions.

She has an attack suit which she uses on a mission which involve defeating an army.The attire is white felt tied into a belt and jeans.She has a white felt bandana(Same material as belt) instead of her purple headband.Her hair stays the same but her shoes and shirt change.She wears a one sleave rainbow shirt and purple cosmic boots. Her gloves change into white gloves that go around her whole hand with purple detail.She wears a locket that has been in her family for generations giving her hope in everything.She also wears a blue friendship bracelet.She finally has a weapon which is a small knife/mini sword.The process in making her combat

suit had experienced technicall difficulties and her ears and tail was not included into the suit.

Her cosmic suit is what she wears when she is on another planet.She wears her pink cosmic boots.She also wears a purple top with really long sleeves,a blue skirt,red belt,white socks,mini red glasses,a blue felt scarf and a skinny purple headband.In this outfit Cassie does not wear any gloves.Everything else about her appearance remains the same.

Cassie is a typical girly girl who has a number of romantic intrests.Her obvious one is Harri the wolf.She shows affection to him and then blushes out.She also sometimes comments something romantic in her breath when the two are in awkward poses.The other love intrest is Shimmer the Hedgehog.Although she doesn't show this because she knows he doesn't fancy her and is too young for him.

"You shouldn't be wearing a sleevless top"-Knight

"Well,It's better than what you can offord!"-Cassie

"This is going to be a LONG day!"-Cassie

"The sewer rats did it"-Cassie

"-Falls down an ice slide-AAAAAH!"-Knight

"It's nice to see you again!"-Knight

"Yes!I remember your the guy who put me in a cage,chased me everywhere and attempted to eat me!"-Cassie

Cassie is found annoying in most roleplays.The fans say she has an annoying voice and is a rip-off of Amy.Cassie has been liked in a specific fanbase and is well recieved in Japan.

Cassie's original name was going to Tiffany and her attire would be different.Cassie was also intended to be a bilby instead of a rabbit.This design was going to make her a whole new person but this design was transfered to other characters.The name went to Tiffany the cat and the base went to Cyclone the hedgehog along with jeans which was changed into a skirt.Cassie still kept the hair and her usual clothes were only slightly different to her first design clothes.This design was going to make her 16 and be in a game which was deleted in the process due to loss of characters and not being able to find a name for it. It is being told that this design is being converted into it's own character by itself with a new name,story and personality.
Retrieved from "https://sonicfanon.fandom.com/wiki/Cassie_the_Rabbit?oldid=1813251"
Community content is available under CC-BY-SA unless otherwise noted.