Start a Wiki
This is an article about Carson the Hedgehog, a character created by oOheartsOo on DeviantArt and adopted by Spyken (Emidikun on DeviantArt). 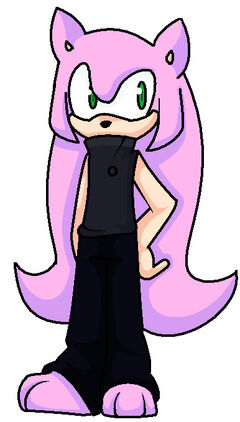 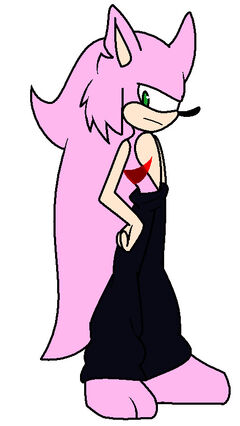 Carson is a hedgehog from the future. He is Spikes' maternal cousin and the current heir of the Rose family.

Carson is a pink hedgehog with peach arms and green eyes. He has three back quills, the two side ones almost reaching the ground and one shorter middle one. He also has two short sidebangs.

He wears black trousers and a black sleeveless shirt. He has a disliking for shoes, preferring to walk barefoot most of the time. When he is required to wear some however, he dons simple sneakers.

Ten years later, His appearance didn't really change much, except that he got a little bit taller. He also changed his shirt.

In an alternate future taken over by an ancient malevolent entity, he still wears black trousers, but started to walk shirtless, exposing a scar he gained on the side of his torso. His two side bangs are also shorter and messier.

Carso seems pretty apathetic, constantly having a bored expression on his face. When he was a kid, he used to be very cheerful but started to become less and less thrilled with life as he grew up because, being the current heir of the Rose family, he could have anything he wanted when he wanted. While most people would become really spoiled due to this, growing up with his cousins (especially Spikes) prevented that. While being the older one, he looked up to the enthusiasm his younger cousin could have sometime over the little things in life. Spikes and his dissappearing caused him to lose the little spark he felt he had in his life and wanting to find his purpose, he left home to go on a journey, not having a set destination but enjoying the journey itself.

Despite this demeanor, he still is a rather nice guy, who will not hesitate to protect someone who needs it. He will just not be enthusiastic about it.

In the alternate future he retained his overall demeanor, but also got a sterner personality.

Carson was born as the only child of Samuel Rose III, making him the current heir of the family. His family had high hopes for him, since he even as a child showed some remarquable abilities. His father, despite being the current head, was born powerless. So when he showed some degree of superstrength in his youth, his family was more than thrilled with it. While growing up he discovered he also inherited the powers from his mother's side of the family, causing him to gain even more importance to his family.

He grew rather alone due to this, his family wanting to preserve him from any harm. Therefore he was more than happy to be able to spend time with his younger cousins Spikes and Silvia when they came to visit, spending whole days playing outside or inside or just listening to them.

When Spikes' family dissapeared, he was very distraught about it. He refused to speak to anyone for some time and spent entire days inside his room. When finally convinced to leave his room, his demeanor didn't really improve either. He would give very short anwers if asked a question, would not show any enthusiasm when doing anything but showed an increased interest in training sessions, even training outside of them.

One day he went to his father and told him he needed to leave the house. Not understanding it at first, his father said that it was ok but that he needed to return home early. Carson told his father that he meant leaving for real, wanting to go on a journey to find himself. He told him that he wanted to be able to find the joy of the little things again, to have life teach him lessons with its hardships. After some hesitating, his father agreed, finding his son's happiness more important than what th family thought was good for him. He still made him promise to come back if the family really required it.

1 of 12
Add photo
Retrieved from "https://sonicfanon.fandom.com/wiki/Carson_the_Hedgehog?oldid=1820386"
Community content is available under CC-BY-SA unless otherwise noted.