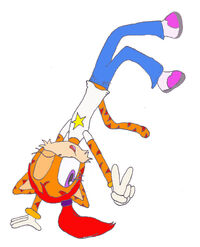 "Look, I know things may look bleak now..but, hey! We're the good guys; they're the bad guys! We'll win - it's a law of the universe!"
—-Carrie the Cat

Carrie is an upbeat, energetic cat who lives on the Little Planet. Her best friend is Sunburst the Hedgehog, queen of the Little Planet, whom she helps to defend the planet. She has no powers of her own, but instead uses her gymnastics skills to fight villains.

Carrie was born on the planet Klenina to a clan of cats, but her memories of that time are rather fuzzy. When she was 8 years old, her clan was attacked by some villain with power over black holes (she now assumes that the attacker must have been the "Black Menace" [Shirley], though she still doesn't know why). Carrie got sucked up by a black hole which landed her on the Little Planet, where she met Sunburst. Before that happened, however, her mom gave her a necklace with a heart-shaped gem, so it's very special to her (she used to wear it all the time, but she now keeps it in her home due to almost losing it on a mission). She never was able to find her planet again, but still looks for it from time to time. As of now, she works with Sunburst to defend the Little Planet and, now, also helps with things on Mobius.

In this roleplay, Carrie is actually from that world. Therefore, she has a different role (she's a horse breeder) and talks with a western accent. She is still friends with Sunburst there.

Carrie is very outgoing. She is always the first to jump into a situation, often without thinking. She tries to keep a positive attitude at all times, mostly to help Sunburst feel less pressured. She also has an inexhaustible supply of energy, which can sometimes run her friends ragged. Still, she is always willing to help when her friends need her and to protect the things she cares about.

﻿Feel free to put your character in here!

Retrieved from "https://sonicfanon.fandom.com/wiki/Carrie_the_Cat?oldid=1327999"
Community content is available under CC-BY-SA unless otherwise noted.