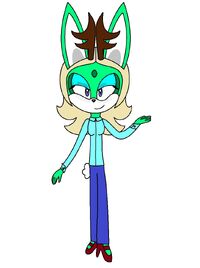 Grandma Carolina Peregrine the Jackelope is a Gaian prophetess and the step-grandmother of Becky the Skyhog, as well as one of her most powerful and respected allies. She is an elderly jackrabbit with the papilloma virus that causes horn-like protrusions to grow from the top of her skull, and is deeply caring and resourceful, as well as very powerful.

Carolina is a spring green jackrabbit with blonde hair and long ears that stick upward. She has a darker green spot on her forehead that resembles a tilac, indigo eyes, her eyelids are aqua, and the corners of her eyes are the same shade as the spot. She also has a small white tail that resembles a cotton ball. The horns that grow out of her head are dark brownish. Her main attire is made up of a blue button up blouse, indigo pants, and red high-heeled shoes.

Carolina is a generally kind yet strict person. She takes it upon herself to guide Mystic Beings and new Guardians down their destined paths in hopes of them fulfilling the prophecies she sees. To Becky, she makes up for the grandmother she never had, due to her own having been dead for a long time. She can be strict at times when it comes to her family rules, but is still a kindly woman no matter what.

Carolina was born to the Lepus tribe of jackrabbits in a desert located in the country where Empire City is located. She caught the rabbit papilloma virus at a young age, and started to grow her horns. The high priests of her tribe took this as a sign of a new oracle being born, and sent her to a monastery to train under the top priests and psychic mediums to develop her powers. After years of training, Carolina returned to her tribe to find it destroyed and her family killed. She was about to lose herself in her own anger, but was found by Joseph Peregrine of the Crossfire tribe from Shamar, and asked her to become his wife in hopes of waiting for the day a new Mystic Being is born. Carolina saw the event and agreed. Using the secret power of long life, Carolina and Joseph slowly blended into society, disguising their identities. They had a hedgehog son, and twin daughter rabbits, so they adopted their sons, an eagle, an armadillo, and a fox. Soon, their eagle son married the widowed Maureen Archive after rescuing her daughter, making Carolina the daughter's new grandmother. Finally, Carolina decided to take Becky in for the summer of her 15th year, and began to train her.

Carolina's main psychic power is her ability to see into the future, but she is blessed with magical powers and teleportation.

Her abilities are mainly magic and teleportation.

As she is a jackrabbit, Carolina has great endurance, giving her great speed, agility, and being able to jump very high, despite her old age.

Carolina still feels the pain of losing her tribe to the Mobians. She suffers from extreme lactose intolerance.

Retrieved from "https://sonicfanon.fandom.com/wiki/Carolina_the_Jackalope?oldid=1621657"
Community content is available under CC-BY-SA unless otherwise noted.