[[User:Pianoteen|Pianoteen]], the author of Carly the Cat, considers this page to be unfinished. As such, some sections may change. 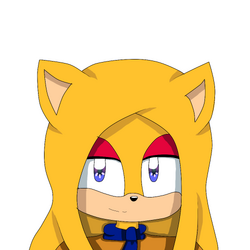 Carly the Cat is a character created by Darkest Shadow. She is the mother of Lina and Christina, and works as a hairstylist in New Mobotropolis.

However, with Lina being in Gaudia University, and Christina working in New Oreal City, Carly and Tempest live alone in their huge mansion. Being a mom, she always tries to butt in in their children's lives. Every two weeks, Carly had to send her kids to see their father. As a job, she takes a train to New Mobotropolis to work at a hair salon. She is pretty good at designing clothes, and still has her fashion and styling degree hanging on her room. Being famous, lots of people go down to her workplace and are dying to get their hair done by her.

Carly was the daughter of Opalesence and Francis the Cat. She was a golden cat, who apparently loved to sing. However, her obsessive singing stopped once she hit puberty, and her voice lost it's cuteness.

Not very much known about how she spent her years of youth. She didn't play any sports, and wasn't really involved in a lot of activities. She was just socially popular all throughout her school years.

One day, Carly was walking until somebody knocked her into the water. When she was knocked in, she thought he was crazy, but then she realized how handsome and attractive he was, and never mentioned it. They introduced each other to themselves and became good friends.

Carly was very influenced by fashion and was considered to be one of the most attractive girls in her school. She competed in world class competitions, but only got as far as winning Miss New Verona once. She kept up with the latest fashions and had many popular friends thorughout high school.

Somewhere in her senior year, Carly fell in love with Gold. That's when graduation happened. At the end of their graduation, they had their first kiss.... and they haven't seen each other in their future colleges.

Carly got accepted into a few colleges, one being Alskora. She was very excited because Alskora offers some of the best college courses in fashion marketing.

Her first years of college were exellent. She was passing her fashion, designing, and hairdressing courses. Some people even admirred her for her singing.

One day, Carly was going skiing, and then she fell on her skis and knocked into a boy. She realized that that was the same boy that knocked her in to the fountain in middle school. Both were thrilled to see each other again. From their, they refounded their relationship and fell in love again.

On a magical day, Gold said the four words that made Carly almost cry. They were seeing each other for a very long time, and Carly was performing for a bunch of people. Gold came on stage and told Carly that he had a little "suprise". He knelt down on one knee and opened the box, "Carly Morgan Monnie, will you marry me?" Gladly, she accepted and they became engaged.

A few months later, with the help of her family, she got the money to make her special day very magical. She chose some of her friend's daughters to become her flower girls and bride's maids. She chose her best friend, René, a friend of her's, to be her maid of honor.

For their honeymoon, Carly used her money to fly to Laluhu to have their honeymoon. It was magnificent, from the first class flight to the fire breathing, and the romantic waterfalls.

Being the mother of Lina was tough. She came out a C section and the pain in her stomach lasted for days. Sleep was a huge problem for the couple. Keeping Lina calm and content was a nightmare. She kept crying and crying through the nights, and the standard pacifying methods weren't working. She had to mostly drop her off at daycares since her life was so busy. Lina didn't prefer the arms of either of her or Gold, which angered them very much. She much rather preferred Aunt Snow or nobody at all.

However, it only took a year and a half for the constant crying to calm down a little. Lina

Three years later, her second child was born. Christina was the only name she could think for naming this child.

Carly is your typical mother. She is very considerate and supportive of her family and will do whatever it takes to be with them. She is very solicitious about what they do and tries her best to raise them the right way. Carly has a great tolerance, both physical and mental, to keep her kids calm and collected. She knows exactly what to say and do in tricky circumstances and finds a way for almost anything.

Carly is a very kind and caring woman. As a mother, she takes very good care of her daughters. She treated her daughters just like how her parents treated her when she was their age. Her discipline isn't very strict. She tries to raise their kids to be nice, kind mobian beings. The results varied, while Christina grew up to be a sweet but tough lady like she envisioned her kids to be, Lina became a rebellious rockstar, the one thing she didn't want her to become.

As a mom, Carly envades people's space. She always tries to butt into her daughter's lives. She always wanted to feel hip and young. Some of these actions involve interrupting Christina's sleepover parties, making her daughters' 16th birthdays like their 6th birthdays, and constantly watching over, spying or eavesdropping on their friends.

Despite this, Carly is rather seen as a jealous mother. Seeing her daughters, especially Christina, having a more successful career than she had, she would often wish that she was more successful. For instance, Carly never even won the title of Miss New Verona, while Christina won that title several times. She would try her best to stop her children from doing things because "it will embarrass them".

Carly fights for what she believes is right. When her kids are in danger, you know she will be there as soon as she can to settle the problem.

Retrieved from "https://sonicfanon.fandom.com/wiki/Carly_the_Cat?oldid=1824409"
Community content is available under CC-BY-SA unless otherwise noted.