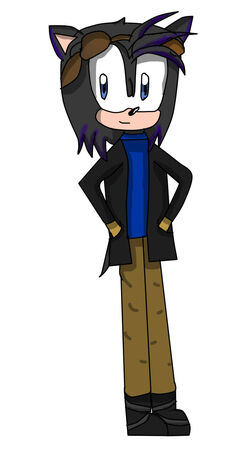 Carlos the Hedgehog is a fan character created by Darkest Shadow. He is an expert at flying actual planes, and was certified as a young co-pilot. He is also the boyfriend of Mary the Hedgehog.

Carlos was born in Tamaruin City on January 1st. He liked his life, but never really talked. He was extremely quiet, and rarely ever did anything. He usually talks and responds with one word such is "Yeah" or "No". Nothing really exciting happened in this time period.

During his first few years of elementary school, he was at an assembly and learned about career day. He wanted to become a pilot, which nobody even came close to thinking of it. He also learned about his aerokinesis, in which he became very good at the skill.

In the third grade, he learned how to skateboard, he became really good at the skill. He also got the chance to sit in the co-pilot's seat when somebody was flying a plane. Then, he became the hottest thing in the school.

By the end of elementary school, his aerokinesis improved and now learned how to fly without wings. He also improved in his skateboarding and learned acrobatics to perform better tricks.

In his first few years, a pro skateboarder named David saw Carlos's skills in skateboarding. He described them as "cool" but he could do better. He also learned how to create a tornado with his aerokinesis. He also started a project: Project Plane-Builder.

1 and a half years later, his project was complete and got certified by the Tamaruin City Government as an official pilot. He also befriended David and became part of the Swag Five- which became the Swag Six afterwards.

Carlos got accepted into the MCA for his piloting and aerokinesis. He always hangs out with David, Danny, Sebastian, Candace and Evergreen. He also learned hand-to-hand combat. From there, his life is pretty straight forward.

Carlos is laid-back. He is calm when it comes to problems and gets a solution with every problem. With the exception of crashing planes and being insulted, nothing really bothers him.

He is also very gallant. His actions are very heroic, and sometimes even extremely generous. From putting down his coat for someone's shoes to not get dirty, to defeating a villain like Mimi.

Plane Flying- The thing that Carlos loves to do the most is flying a plane. He built his own plane with the help of his dad, and succeeded. He has taken flight school and allows the citizens of his city to ride his airplane for a good cost. He has had very good experience for the past years.

Sky Diving- He is also very good at sky-diving. During his flight training class, he learned how to escape a plane in case of a terrorist attack. In all of his airplanes, he keeps parachutes in case of real emergencies.

Skateboarding- Carlos is seemed to be a very talented skateboarder. Ever since he was little, he went up to the TV and looked at others skate. As of now, he is one of the best skaters in the world.

Wind Manipulation/Aerokinesis- Carlos has the power to manipulate air. He has the ability to make the wind weaker or stronger. He can also use his power to make a circle of winds spin rapidly to make a tornado. Alongside that, the could shoot air balls right out of his hand

Retrieved from "https://sonicfanon.fandom.com/wiki/Carlos_the_Hedgehog?oldid=1853275"
Community content is available under CC-BY-SA unless otherwise noted.