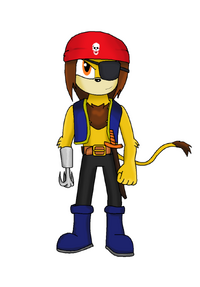 His overall appearance is similar to his descendant Cyo except he has a amputee with three hooks, a missing left eye and wears a blue vest with yellow brims, black pants, belt with sword sheath, blue boots, red bandana with a skull on that covers his ears.

Unlike most pirates those goals is to get treasures and kidnap people or to outright kill them, Ironclaw is commonly rescuing slaves from ships. But despite that he often kills in self-defense and still values treasures but does share with his crew. At times he can be strict and commanding when giving orders.

After his fight with Dreaded Dory he is much more cautious since he lost his eye in the fight.

When Sonic and Amy traveled through time in a book he grew to respect the two helping him fight Captain Greenhawk, the counterpart of Jet the hawk.

In situations when a sea monster attacks his ship he is willing to blow up his own ship by setting the gun powder on fire.

At some point in history, he meet a lioness and got married, to eventually getting a daughter with her. But as he got into piracy, his wife left him to raise their daughter alone. He however told her to not let their daughter follow his pirate life.

He found and stole a brig ship renaming it "The Golden Shark" due to a gold painted shark on the front.

Some time later, he lost his right hand under unknown circumstances and recruited some to his crew, among them a former slave named Pix, who became like a little sister to him.

At january 1703, Ironclaw came face to face with Dreaded Dory and they engaged in a fight in which he lost his left eye. He managed to beat her and get away with his crew before they could be killed.

During 1704, Ironclaw and his crew meet Sonic the Hedgehog and Amy Rose who came to their time through a magical history book. At first they saw them as threats until they revealed themselves to be heroes. The pirate captain reveals to them he rescues slaves and allows them on temporarily recruiting them. They fought together in battles against Captain Greenhawk and successfully defeats him and a sea monster, but at the cost of The Golden Shark.

When meeting up with a scottish trader named Scotia, he got a new ship and sought on a mission to return Sonic and Amy to their time by finding the emerald treasure on Echidna Volcano Island. Inside the volcano, Sonic and Amy said their farewells to the captain and his crew and returned to their time.

Some time later, the Golden Shark crew resumed their quest in rescuing slaves, some that were going to be sent to Emerald Town. After sinking the slave ship after rescuing the slaves on board they brought them new homes by the stolen treasure and celebrated their victory for now.

But the next day on their way to Apotos, Ironclaw saw the aftermath of Dreaded Dory's attack at the harbor. 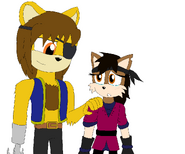 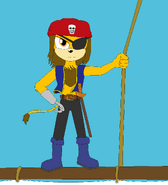 Add a photo to this gallery
Retrieved from "https://sonicfanon.fandom.com/wiki/Captain_Ironclaw?oldid=1856861"
Community content is available under CC-BY-SA unless otherwise noted.