No matter what, I will not rest until I avenged me parents! 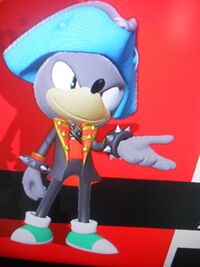 Replace this text with a description of your character's appearance. Make it clear and vivid so users can picture the character without a picture. A GOOD DESCRIPTION IS BETTER THAN A BAD PICTURE! If you don't have a decent picture for your character, just skip it!

When he was a young dog, George's parents were killed by Captain Metal years ago. Soon after he grew up, George decided to avenge his parents and became captain of his own heroic pirate crew. His crew promised him that they will not rest until they avenge what George has lost, After a few years passed, George decided to change his name to Captain Houndbeard, Hero of the Seven Seas.

Crab Summon- Captain Houndbeard calls in big armies of crabs to pinch his enemies for dealing great amounts of pain.

Parrot Swarm- A huge swarm of parrots fly in to action to swarm around the enemy to distract them, giving Captain Houndbeard a chance to attack.

Being a dog, Captain Houndbeard has Danger Senses. Which can sniff out any danger and enemy coming up from behind. He can also use it to track down any kind of trouble.

"For the Seven Seas!" -before fighting

"It's time to end this." before fighting Captain Metal or a final boss

"Ye have been bested, ye scurvy seadog!" - after beating a final boss

"Never mess with the Hero of the Seven Seas." - getting a S-Rank

"All for Captain Houndbeard and his crew! Har-har-har. - getting an A-Rank

"Arrrr, shiver me timbers." - getting a C-Rank

"Yarrr! Son of a biscuit eater!" - getting a D-Rank

"Such a humiliating performance!" - getting a E-Rank

"Nobody laugh at me! - getting a F-Rank

Retrieved from "https://sonicfanon.fandom.com/wiki/Captain_Houndbeard?oldid=1857859"
Community content is available under CC-BY-SA unless otherwise noted.