C-C....Charles? Oh..... Please.... please don't mention that name. Every time I hear it I just want to crawl in a corner and wait to die. That name was the name of my father. My father passed away a few years ago. He fell off of a balcony that was 30 feet high. I try to forget it, but my stupid photographic memory makes it planted in my brain forever, and now, just hearing the name of my father brings a sharp pain to my ears and heart.

— Candlelight telling her friends about her father 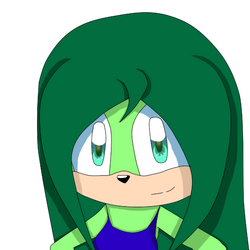 Candlelight the Echidna is a fan character created by Darkest Shadow. She just tries to be an ordinary girl living in Beach Cove, but is viewed on as one of the most musically talented girls in Beach Cove.

Aria Patrice France is an eighteen year old echidna from Beach Cove. She is a young echidna who is gifted with an amazing voice and a talented instrumentalist. The town has recognized her to be very gifted, although she tries to act as normal as possible. She currently has just graduated from the Mariala County Academy, and is going to the Riverside University in Laertes. She currently has a dorm room with her new best friend, Alison.

She loved to help clean up her environment and was working as a part-time maid for anyone in Beach Cove City with a messy home. She cleans every little detail so they don't have a mess. She also asks the person questions on what to do in case of electronics in what to leave on, and what to leave off.She also goes on to the beach and cleans up all of the garbage to make the beach safe. She even convinced the mayor to dump all of the waste to somewhere that's not the lake.

Candlelight is an echidna with apple green colored fur. She has jade green hair that goes down to her middle back. Her ears are hidden behind her hair, like most echidnas. She has a peach muzzle too. Her tummy and arms are covered in fur. Her eyes are aquamarine.

Candlelight wears a blue cropped tank top with a same colored bra underneath it. Her tummy is showing. She also wears a blue knee-length skirt with pointy triangular frills. She wears pale blue socks and blue shoes. To complete her outfit, she wears a pair of white gloves as an accessory.

Candlelight is a rather quiet girl. Calm, content and not much of a talker, she doesn't have that good of social skills. She is the least talkative one out of all of her friends, which they really don't mind. She also stays calm when situations rise and easily finds a way to solve her friend's problems.

She is also a softie. Sensitive and sweet, she feels empathy for those with a deceased family member, especially a parent. She's very emotional and in tune with the feelings of those around her. If someone has a break down, she always has a way to make them feel better, she'll light up their world somehow. She would do whatever it takes to make them happy.

Contrasting from her quiet and soft-spoken personality, when Candlelight hears the music, she gets very "into it". She gets excited when music starts, it's basically what jumpstarts her day. Whether she listens to her favorite song, she'll start to sing along. Even when she's singing, nobody would expect that this shy sweet girl has such a powerful voice.

Candlelight is described to be very musically inclined. She has two rare music abilities. The first one is perfect pitch, where she is able to correctly name any chord, note or interval sung or played on an instrument. The second one is where she is able to figure out the chords, melody and harmonies of a song from listening to it at least three times.

Candlelight has an outstanding voice. She has no intentions on making it big, although most of her peers really encourage her to do so. She likes to perform in front of her friends, and sometimes she likes to sing in a studio just to hear how her voice sounds. She usually likes to belt out her favorite songs when she's alone, and she gets a little nervous when she is asked to sing in public. Her vocal range is an alto, as she is able to hit several low notes, but she is able to belt out some high notes. Her range is from an A2 to an E5.

Candlelight also plays the guitar. She started playing at a young age and had a very close relationship with her teacher's son. At first she struggled playing several chords, but now her fingers move along those frets with ease, and she doesn't even have to look down to see where to place her fingers anymore. She likes playing chords and arpeggios, and is somewhat confident in playing a few solos.

Candlelight also learned how to play piano. Her old instructor's son taught her how to play. She found it extremely easy to do, as it was just hitting notes on a keyboard. She has also gotten very confident with this, and now likes to play covers of her favorite songs on this.

Candlelight was born with a natural gift of photographic memory. She is able to remember everything she sees. This comes in real handy when she needs to study for a test, of analyze a crime scene, etc. etc. She can even remember the tiniest detail, like a citation from a note or letter.

Candlelight's biggest weakness is her sensitivity. Although she is strong in most situation, she hates it when people bring up her father. She tries to hold back the tears in most situations, however If they bring up how he died, then she will most likely break down in tears. If they bring up anything like his wake or a childhood memory, then she'll probably cry even harder. This is the easiest, yet the cruelest way to make Candlelight feel sorrowful and weak.

Even though Candlelight was born with the ability to remember everything she sees, she describes it as more of a curse than a blessing. There a lot of things that she has encountered that she wants to forget, but she can't. Some of those things are memories of her father, her father's death, her injuries, her nightmares and a lot more.

Being naive is a big disadvantage. This causes lots of people, especially villains, and bullies, to take advantage over her. She can be easily manipulated into doing whatever they want, like giving up her powers, or cheating on tests. She sometimes knows how to break free and know that she is being tricked on, but it's not often that happens.

Defense: 7- She can defend herself rather easily, heavily contradicting her attacks.

Evasion: 7- Her way of dodging is a simple spin jump, which is fast and rapid but could leave her open for damage.

Intelligence: 10- Her photographic memory makes it easy to find out the location of things, whether it'd be her missing phone, or a crime scene.

Skills: 8- Sometimes, she's able to incorporate moves from the activities she does into battling.

Accuracy: 7- She doesn't miss attacks often, but when she does, it leaves her open for an attack.

Stamina: 6- She gets tired after about a half hour of battling.

Tolerance: 6.5- Similar to defense, she can withstand many attacks, especially the ones that are weak against her twin elements.

Retrieved from "https://sonicfanon.fandom.com/wiki/Candlelight_the_Echidna?oldid=1828275"
Community content is available under CC-BY-SA unless otherwise noted.