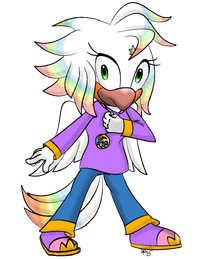 Candi Phoeniox is a white anthropomorphic Cockatiel/Phoenix hybrid with white and rainbow tipped plumes, crest and tail feathers, a gold-peach beak and feet, and emerald green eyes. She was born with color changing rings that change colors (along with her tips) when she is in a certain mood, similarly to a mood ring. Most of outfits have varied, ranging from a purple and blue stripe sleeved sweater and capris in her first appearance to her current purple and gold cuffed long sleeve with star edged blue jeans. In most of her appearances she retains her signature pink and purple hi-tops and wand.

While she may come across as friendly a good portion of the time, she can be frugal and impartial towards strangers and those she can't entirely trust. She has a range of personalities but often appears to be goofy, bubbly and carefree with a secretively serious side.

Candi was born in the kingdom of Rhodanthe in Phoenixa on the 178th day of 3220, during the 9th Phoenixian War. She was to undergo training to control her magic after her first birthday, but she unfortunately had been kidnapped before getting the chance to do so. Most of her younger years she was raised by a colony of Faerie Chao residing on the island. At the age of 10, she began venturing the world with her companion, Mirabeau, in search of her family, only to encounter alot of endearing experiences along the way. It wasn't until the eve of her 15th birthday that she was made aware of the tasks and trials that lay before in her search for her family.

When she and Mirabeau first reached Felicity Town, they were met with a somewhat mixed reception. Having found two allies, JK (who had been rescued from Vlassameer, who was under the disguise of a thief, and his assigned Necrosian) and Vlassameer (who had seemingly been "rescued" from a fight used to lure her out in to the open). Her other allies would come in the form of unexpected mishaps (particularly meeting Tila, a unrequited spirit, at Chateau Phoeniox) and rescues throughout her quest.

She can retain Phoenix forms via the Elementia Relics. However, she can only turn into the three basic phoenixes in the absence of the relics. She primarily has control over fire and white magic.

She can control up to 14 forms (not including the Celestial Form). Each of these are based on the Earthly Elements (Fire, Air, Earth, Water and Metal), the Spiritual elements (Darkness, Chaos, Order and Light), Naturalistic Elements (Lightning, Ice and Sound), and the Ethereal Elements (Dreams and Nightmares).

She primarily is a magic user by birth. However, her high pain tolerance tends to enable her to fight for longer durations while enduring the pain.

Out on the field, she is a resilient fighter, using both white magic and raw fire power to do the job.

Outside of battle, she is a jack of all trades. She tends to refuse using magic as a means of doing anything that good old fashion hard work is meant for.

Naturally, she has longevity due to being a Phoenixian, but she can be killed via chronos magic. She also seems to have a deathly horrible phobia towards failing, often going as far to give up if she has not prevailed.

She currently is in a relationship with JK Walcatt.

"A hero's true worth is gained in the experience they've gained and the effort they put forward, not by the amount of treasures and gold they earn. If you only care about keeping those treasures more than feelings of those you cherish, then you're more a fraud than anything, because you are more selfish than charitable. However, those treasures you do earn, are better when being put to a good use and being shared by friends, family and those less fortunate than you. If being selfish is what gains you special privilege to be a worthy hero, then I would truly hate to be one of those types."

Tank top variation 1- Wore clashes of color and had three colors for the barring: purple, green, and pink

Tank top variation 2- Tank top color is changed to red and the rainbow barring first appears on the character.

-Each of the Phoenix forms are based off of various birds found in mythology.

Retrieved from "https://sonicfanon.fandom.com/wiki/Candi_Cockatiel?oldid=1663500"
Community content is available under CC-BY-SA unless otherwise noted.