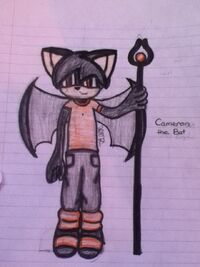 Cameron is a Black Bat.  His eyes are emerald green that shine in the moonlight. He always wears black jeans and an orange shirt. He has black hair and two parted bangs. He also wears orange gloves too. Finally, he wears black shoes to blind in. Although his orange shirt is a giveaway.

He was a neutral character until his apperance in Station Square. He is very soft hearted creature, but tough when it comes to fighting. His is very loyal to Mobius and will never back down from a fight, especially when it comes to protecting Mobius. This is why he has never made an appearance till now. Mobius hasn't needed protection till the killing of Darth.

He has been hiden in his cave for 10 years and has not come out till now. His reason? So he can protect Mobius as he swore he would do 10 years ago. He is currently 16 years old and is ready to fight for Mobius to the death, but is there another reason. Yes, he has a crush on Crystal the Bat. He has admired her for quite some time. She was the one who helped him get through his father's death and ever since then he has been in love with her and will protect her till the end. Later on when he gets to know another particular bat better he changes his mind. They both start out as friends, nut as Cameron gets to know Selene better and better he knows he has feelings for her.

He has a strange ability developed by few bats. It's called Schnellmacht. It gives him the power to travel at any speed. This a rare ability, but remimber he has no powers so this is special to him.

He can be a little stubborn and heard to command at times.

Cameron the Bat
Add a photo to this gallery
Retrieved from "https://sonicfanon.fandom.com/wiki/Cameron_the_Bat?oldid=1510831"
Community content is available under CC-BY-SA unless otherwise noted.